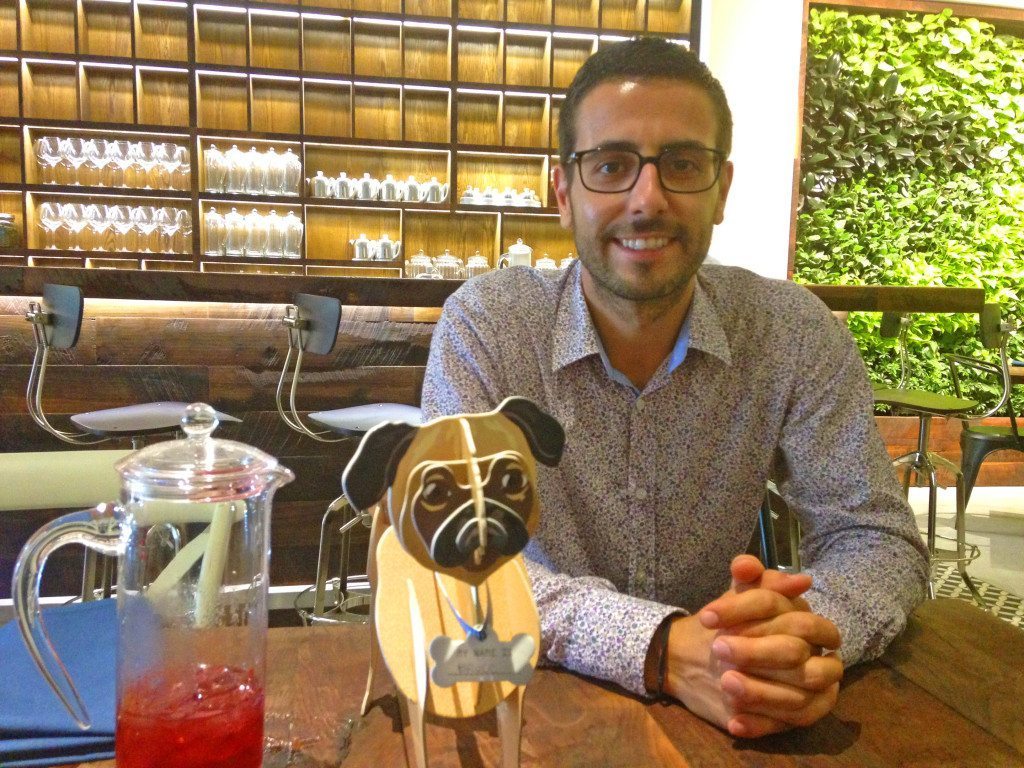 Miami Food Pug: So how exactly did all the partners meet? This is a joint venture between you, Valerie [Partigianone] and one other person, correct?

MFP: How did all of you come up with the Ticety concept? Are you all tea lovers?

Damien: Actually, we all came two years ago to Miami for business because we were in finance. We tried to find a tea place. It wasn’t easy to find a place with a lot of tea or a large assortment of tea. We said, “We can’t find any place, but maybe it could be an idea.” So we came back to Europe and we worked to create a new concept. We talked about the concept, did some market research and we saw that 85% of tea is consumed iced. We saw that it was a growing market — about 10% a year — and in France it is booming. As we worked on the concept, a year and half ago Starbucks bought Teavana for $600 million. We said if Starbucks bought Teavana, there is a market because they have enough money and experts to say there is a market. We thought this would be the time. We’ll build something new. We fell in love with Coral Gables. It’s very nice; it’s like a small European town. We said, “Let’s give it a try.”

MFP: How did you pick the initial selection of teas?

Damien: We had travelled around the world trying different teas. I’m a green tea lover so we went to Japan and tried some of the tea. Afterward, we tried to find someone who sold organic teas because we really want to try to promote something healthy. We can’t sell classic tea because there might be pesticides on the leaves so let’s go organic. For the white teas, we had to go to China. China is the best. Japan for the green tea. Rooibos for South Africa. We have some from Taiwan for the oolong and some from Nepal. But it’s not really easy: The organic market is growing, but there aren’t too many farmers that produce organic tea.

MFP: The name of the place is Ticety Iced Tea Bar but on the menu, you offer about eight iced teas and the rest are hot. Why is that?

Damien: The fact is we brew our tea in custom-made pitchers from France, and it’s a very specific glass. You need to find a very specific glass that can resist a brutal change in temperature. We cannot have 40 pitchers behind the bar, so we proposed eight iced teas. It’s a technical thing because we really want to show to the client that it’s freshly brewed. We use loose tea. It’s not powder and water. It takes time to brew the tea. We’re called an iced tea bar because as I said, 85% of tea is consumed iced, so before saying we’re a tearoom, we said let’s call ourselves an iced tea bar. This way, people will come because they love iced tea and maybe they are going to try a hot tea afterwards. When I talk to people in Coral Gables and Miami about tea, they think directly about hot tea. They say, “Oh no. I don’t drink tea.” “But you drink iced tea?” “Ah yes, I drink iced tea.” We use the word “bar” instead of “tearoom” because it’s trendy. You can find bars for everything now. Sometimes people ask for alcohol, and I say “Oh we’re a bar, but an iced tea bar. Not a classic bar.” 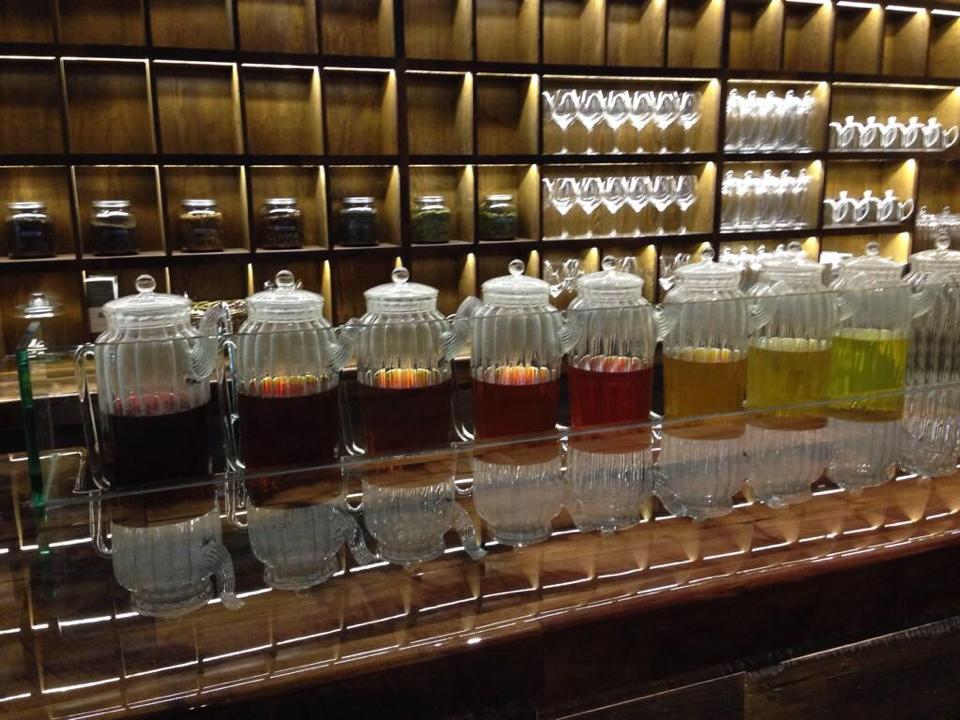 Damien: We really focus on the tea to stay with the market and product we know. We really want to propose the perfect product to the customer. That’s why we don’t serve any coffee either. I think there are enough coffee places here. I love Panther Coffee. Soda, you can find anywhere and it’s not healthy. We have some sparkling and flat water. For juice, we’d like to propose something fresh too. In the end we want people to say, “If I think about tea, I think about Ticety.”

MFP: You offer an assortment of bites, too. What can you tell us about your chef [Nathalie Ngyuyen]?

Damien: Yes, actually a French chef made the menu. She made it onto MasterChef over in France. We chose her because of course, she’s a great person and she works well. She is of Vietnamese origin, and we wanted to find someone who had tea in his or her life to prepare the menu. For example. we have a raw beef salad, which is a Vietnamese plate, so we use a lot of soy sauce and lime to avoid too much oil. We really want to propose something healthy, so we worked with the chef on it. She prepared the whole menu, and she did it well.

MFP: Did she create the desserts as well?

MFP: What’s the story behind the living wall? How did that come about?

Damien: Actually, we saw one in a Europe one time, but it was outside and we said, “Wow! That’s really nice.” We thought it may be interesting to have it inside. Of course, it’s not tea leaves but it’s natural and reminds you of nature. It’s organic and makes you feel relaxed. We said, “If we had a bar like this, we’d like to have two green walls.”

Damien: There are two water tanks at the bottom and a pump with a filter. The water goes up and drains behind using a tray system. The plants are in small pots because if the plants die we can change out the pots and put another one. Unfortunately, we have some dead plants every week because of the artificial light. We’re still working on the system. 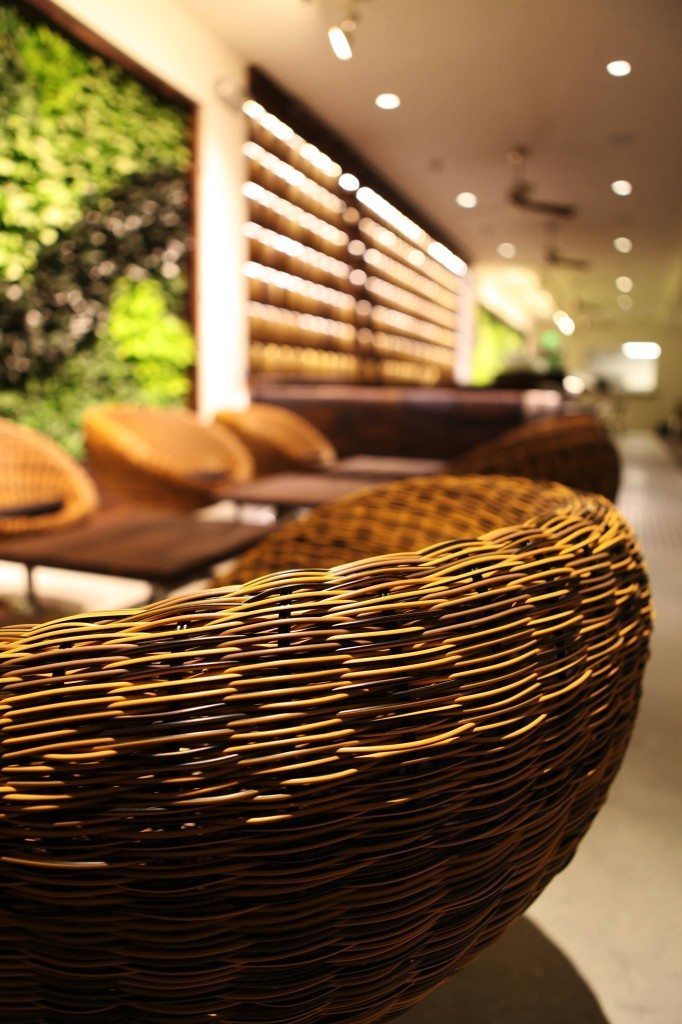 MFP: In terms of feedback, what have been the popular teas?

Damien: The most popular iced tea is the Exotic Dream and the Pure Mango. For the hot tea, it’s the Earl Grey Lavender.

Damien: We’re very surprised that we sell a lot truffled croque monsieur. This is the only French dish we sell and for the salad it’s the salmon salad, which is delicious.

MFP: Regarding the sweeteners, why did you decide to settle on agave instead of traditional sugar?

Damien: Actually, if you use standard sugar it’s like a small rock and if you put it in cold liquid it doesn’t sweeten. For example, if you put the same sugar you use in coffee and try to dissolve it, it’s going to take time. We tried to find the best solution. With liquid sugar, the problem is it’s raw sugar so it changes the flavor of the tea. It sweetens it very fast so if you put too much it’ll be too sweet. We chose the agave because we tried it a year and a half ago and liked that it didn’t change the flavor too much. I think the quantity of sugar in agave is less than classic sugar. Agave is also better for people with diabetes. We chose rock sugar for the hot tea because it doesn’t change the flavor of the tea and sweetens it too. And you don’t have to put a lot of it to sweeten something. Everything is sweet here. We’re going to start the iced tea as soon as I receive my tea canisters. We’re also going to start selling tea by weight, too. We don’t want to sell the hot tea to go because we don’t want to give clients the filter and have them brew it for the three minutes instead of ten minutes. When customers buy the iced tea, the tea is already set and prepared. 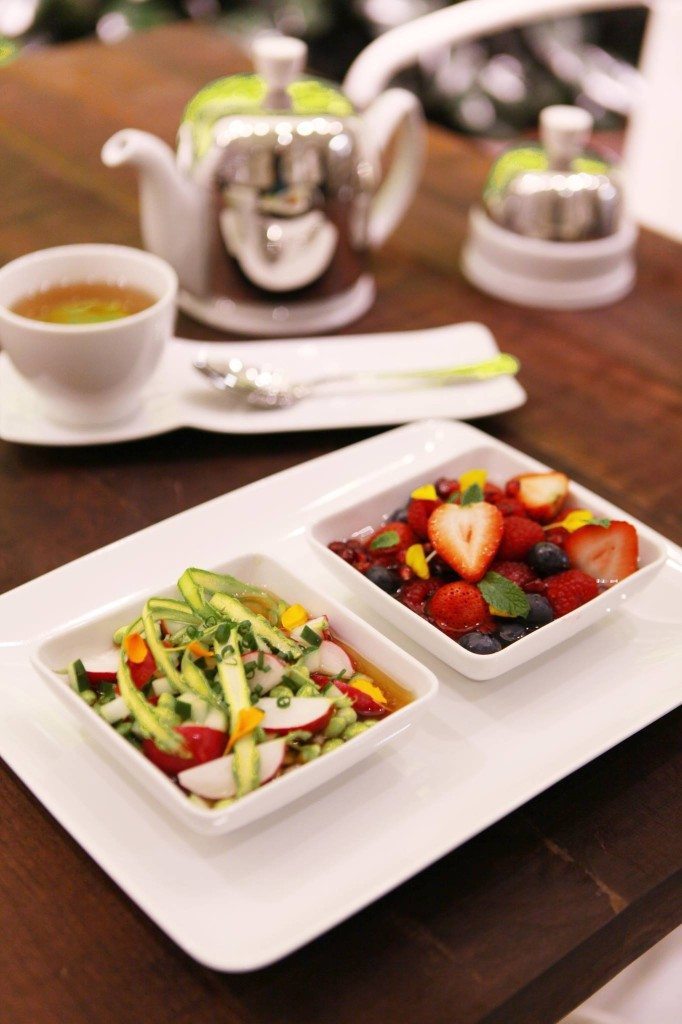 MFP: Are there any plans for a tea club?

MFP: We did hear they’re getting rid of the vertical parking along Miracle Mile, so it’s more parallel parking and there’s more sidewalk space. Would you think about doing outside seating?

Damien: For the moment, the street is too small. We can put two seats and one table right now, but we need a specific permit. I know they are changing the streets next year and extending the sidewalk to 10 feet. After that, we may be able to have a small outside seating area, which would be perfect for everybody. That’s why we chose the sliding doors — so people can be inside and feel like they’re outside a little bit.

MFP: There are several colorful bird decorations around the bar. Can you tell us more about them?

Damien: Valerie made those. There is a French guy that made some really nice lamps with these birds. She loves those lamps, and she thought to incorporate the birds here. We did not want to have any pictures because you can see pictures in restaurants everywhere. So we decided to do something different, and it fits perfectly with the green wall. It brings some color with the white walls, too. We designed more or less everything in here.

MFP: Are you still expanding the store? You’ve only been open a few weeks now but what’s the next step? We’ve heard rumblings of a grand opening in October.

Damien: Yeah, for breast cancer. A lot of our customers are women, and I think this is the perfect time to have a grand opening. Now is the low season so a lot of people are still on vacation. We’re still waiting on the sign from the city. It takes time to get their approval, so that’s why we said, “Let’s have a soft opening, try out the menu, try the concept and get people’s feedback. For example, raw beef salad hasn’t worked well because maybe people don’t eat raw beef. I think in October, we’ll be ready.