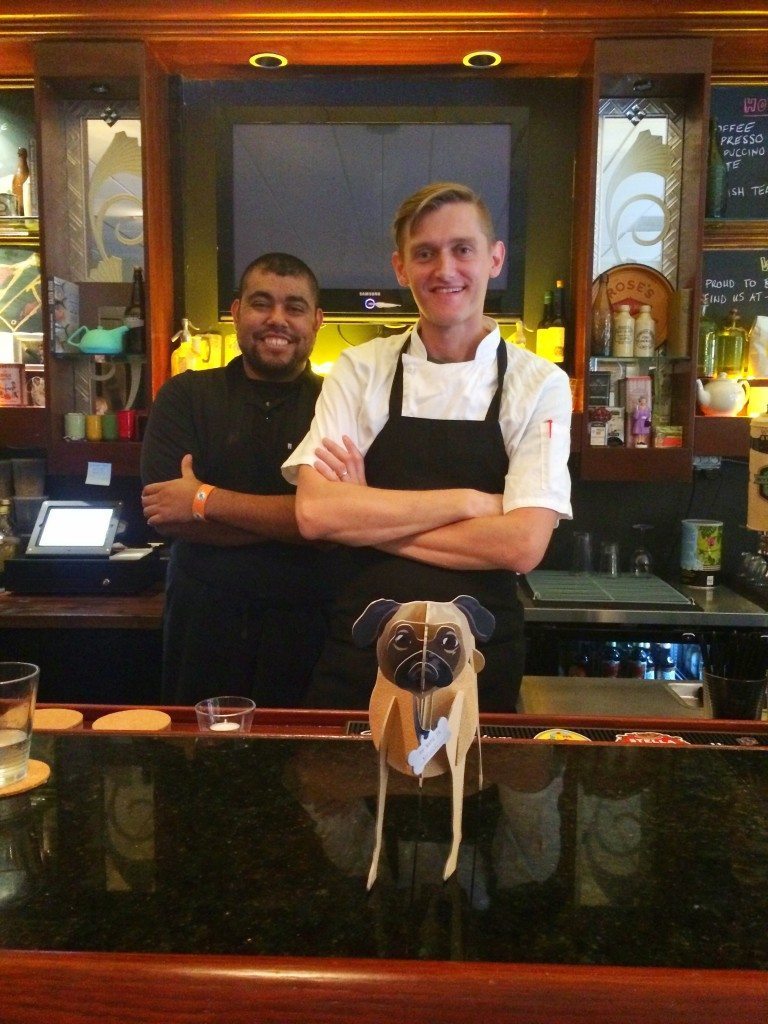 The Seven Dials Owner Andrew Gilbert took some time to chat with Miami Food Pug about his new Coral Gables outpost. We talk about his restaurant background, the eclectic menu and his plans for a Saturday breakfast club.

Miami Food Pug: Based on our research, the restaurant has been four years in the making. After years of cooking at Sra. Martinez and other places, what made you take the step toward opening your own space?

Andrew Gilbert: It’s been something we’ve always wanted to do. Going back at least 10 years when we were living in New York. I was a chef at a restaurant in Brooklyn — the Northeast Kingdom in Brooklyn — and that was a much more simple concept to this. I haven’t yet been to a gastropub in Miami that reflected those same ideas down to every detail of what a gastropub is.

MFP: This whole eclectic gastropub concept — was it always the concept since the beginning?

AG: I’ve done all my cooking in the States. I left when I was 20. I really am an American cook. Obviously I know most of the recipes of the motherland, and it wasn’t exactly my idea to play up the Britishness as much as we are now. It was my mother-in-law’s advice, and she’s always right [laughs]. We may even change that tagline to just “gastropub.” We may just take out the American part because it just seems to be confusing. There’s a hole in Miami. The other reason to push the British aspect is that the London food scene is being lauded recently. Just last weekend there were two articles back to back about how the London scene is booming. What’s interesting is that it’s very vegetable led. That’s something we want to do a lot more of. We just don’t want to scare people at the beginning by force-feeding them vegetables. We will definitely push toward that direction… assuming we can. Right now, people want fish and chips and more fish and chips. It would have been a lot easier for us to just open a fish and chips shop [laughs].

AG: Inadvertent significance in that Charles Dickens wrote about the Seven Dials a lot. He lived right by the Seven Dials. Katie [Sullivan] and I…when we met in London, she was staying right around the corner from Seven Dials. Dickens has a short book of essays and sketches regarding the Seven Dials — and he’s obviously a pretty good writer. The use of language and style is just very good. Another thing is that we want to get a couple of those lines somewhere here. We have a very set conceptualized idea of what we want the menu to be but we haven’t really got there yet. We’re still working on it — right now the menu is being updated so much that we’re still using paper. We’ll get to that stage soon — there’s a couple of really good quotes we want to incorporate.

AG: We were looking into restaurant space and we found this right down the street from where we live. In Miami in general, there isn’t much in terms of solid non-Irish British bars outside of Elwood’s. So yeah, someone needed to make some good fish and chips. I have a feeling that as we grow, the Brits will start coming in greater numbers. There are a lot who live in South Florida. So we just need to get them in here through Facebook and social media.

MFP: So you said you came to the states in your 20s. Did you go to culinary school here or are you self-taught?

AG: I did a very old school French apprenticeship in Queens. I did eight months of proper training with very little money. The first thing I did was become a fishmonger. I didn’t come to the states to become one [laughs] — it just happened to be my first job. Eventually, I got a job as a line cook and worked my way up. I got a job at a French bistro — most of my foundation in cooking is French, actually. 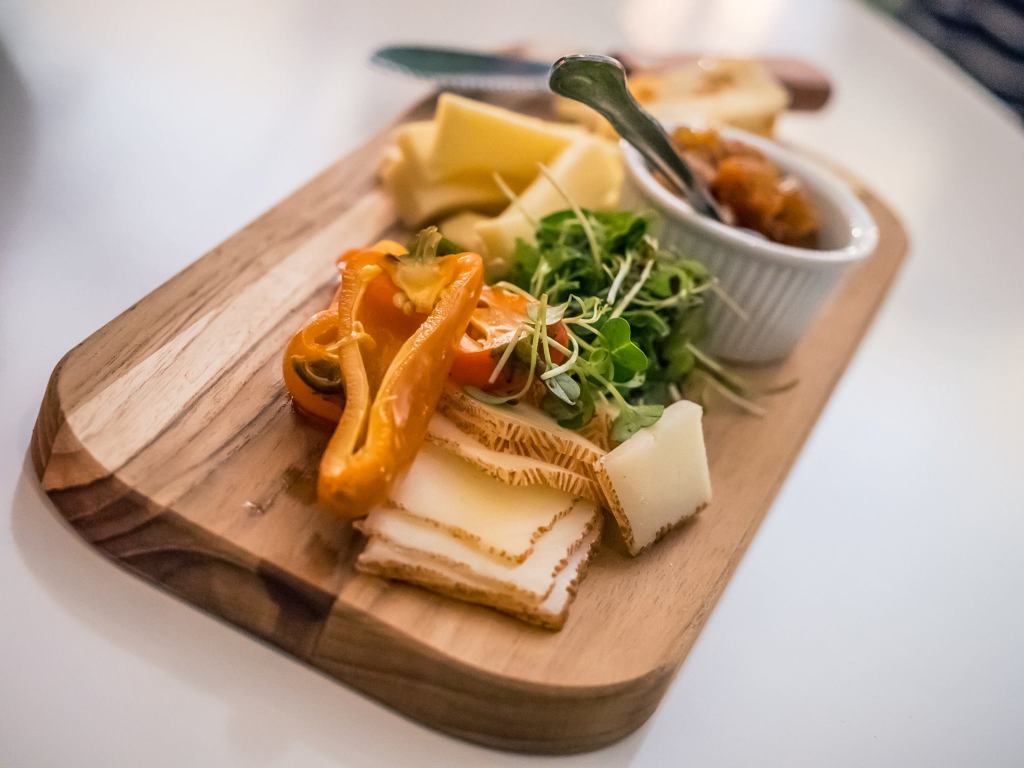 MFP: We noticed you use a lot of local vendors like Zak the Baker and Proper Sausages. Why the local route?

AG: Katie has been running Edible South Florida for the last five years, so there’s an existing interest there. Also, the restaurant I worked at in New York was extremely into local and sustainable products. The owner of that restaurant was absolutely into foraging. There were boxes and boxes of stuff; I’d spend a whole day pickling and preparing things. Up there, it’s obviously significantly easier to be seasonal; there’s a greater variety of things. But yeah, that experience and Katie’s involvement with the magazine has helped us build relationships with all these great people here. Once we get into our routine and have some free time, we hope to get even more local stuff on the menu. That will definitely be in tune with the vegetable concept I mentioned earlier.

MFP: We’re big fans of Kahwa coffee. Why did you guys opt for them as opposed to locals like Panther?

MFP: You’ve been open for about a month, and you’re still tweaking the menu. Have you been surprised by some of the reactions to the food? For example, are people gravitating toward certain items you may not have expected?

AG: Not really. Just the fish and chips, which have been very popular. I think it’s because of the British aspect of our concept. People have been pretty receptive. If people ask me to recommend something to them, I can point them in different directions. We have guests who have been here four or five times already and are going through every item on the menu — it’s great. When I worked at the Local, we had a hard time getting people out of their comfort zones because of the bar feeling surrounding it.

MFP: How did you decide on the initial selection of items you wanted to offer?

AG: Hugo [Perez], who’s our sous chef, and I sat down to work it out. Seven Dials has been a long time in the making, so we had a lot of ideas to work with. I could have written a menu one hundred items long since I’ve had these ideas just waiting to come out. Items like the tomato soup we weren’t sure would work; some ideas have worked out great and some haven’t. Right now, we’re working on a crème brûlée infused with black tea that we are going to serve with a cookie — a biscuit. The first time we put it together, it was pretty close to what we envisioned.

MFP: Instead of regular bread service, you offer lentil papadum. Why the switch?

AG: Well at first, we actually served Zak’s bread. It’s delicious, but very filling. So Zak’s bread followed by more Zak’s bread in our food was overkill [laughs]. We still wanted some form of bread service, so the idea of papadum popped into our heads. In England, there are Indian restaurants at every corner where they serve you a big stack of papadum when you sit. But yeah, we found one we really liked and started to offer it. It’s got so much flavor to it, and the chutney is great. It’s nice, light and appetizing. 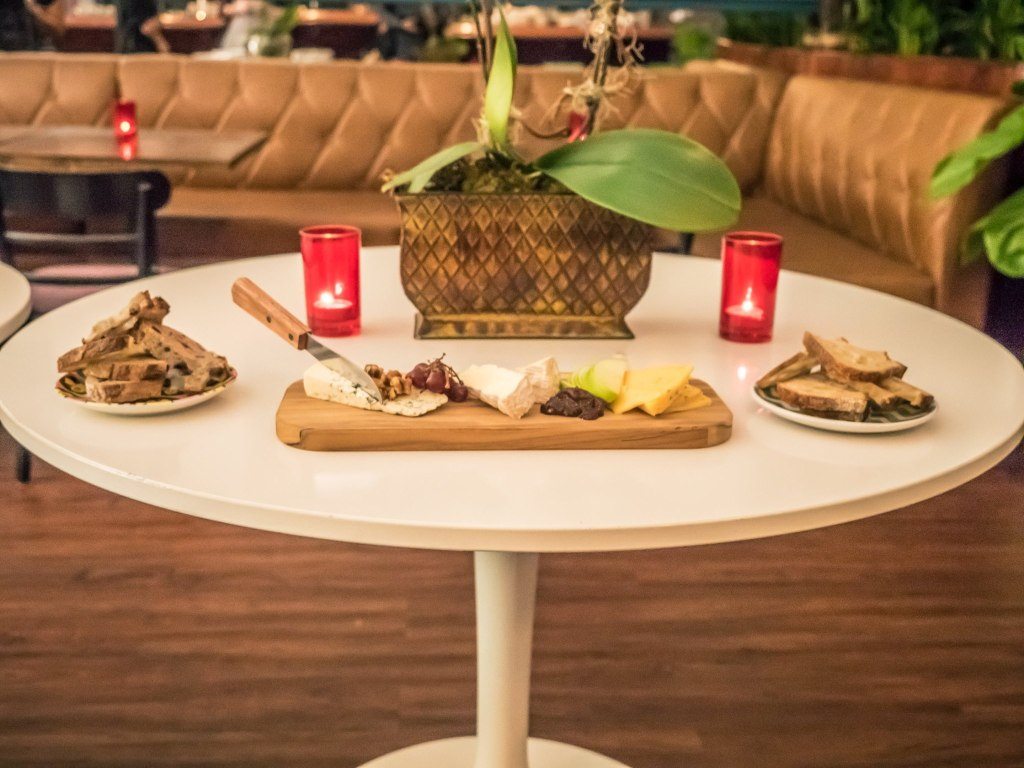 MFP: Regarding the decor, we heard that you actually built some of the furniture.

AG: Yeah, I built the tables and laid the floor. We did the plumbing and the painting, too. Katie and I are pretty passionate about interior design. We bought an older house in the Gables that needed a hell of a lot of work. And I’m pretty handy — my father’s a carpenter of sorts. I picked things up when I was young. He actually came down to help with the house. People who know us have walked into the restaurant and said, “Oh, so you just built your house again.” It literally looks like our house [laughs].

AG: It’s coming. I’m hoping we get it going by Christmas. I’m planning a small type of gathering. We may take reservations and cut it off at 12 people. It will be a full English breakfast including beer and tea. We’ll put a soccer game on TV on one TV because we have one TV [laughs]. The idea would be to actually watch the game. There are lots and lots of places out to socialize but not really watch the game. For example, 50% of the people at Fritz and Franz weren’t even looking at the TV. This idea would be more for people who actually want to watch the game and talk about it. We were going to roll out a Saturday brunch anyway so we would do the breakfast thing and roll straight to brunch. The brunch menu will be ready in the next couple weeks, I hope. It should be ready before the soccer idea.

MFP: Tell us more about the restaurant’s playlist.

AG: That’s another passion of mine: music. I’ve been collecting tracks on CDs and records since I was super young. And now I have the chance to play all of them. That’s one of the very good parts of the job. A good part of owning the place is that no one is allowed to touch the playlist, and we’re not open to suggestions [laughs].

MFP: Any plans for a big grand opening celebration?

AG: Well, we did a big thing for the people in the building here. That’s how we found out we had a problem with the a/c [laughs]. We may do another round of celebration, but we feel open. We’re ready to roll now. As soon as we get to the point where people are consistently making reservations, then we will expand our staff. When that happens, we can free up time for all the other ideas like soccer and brunch.

Photo Credit: facebook.com/sevendialsmiami. The Seven Dials is located at 2030 S Douglas Rd #102 and open Monday-Saturday. Call (786) 542-1603 for reservations and hours of operation.