In the sea that is Miami’s culinary scene, you’ll find a Pearl at the Coconut Grove Improv’s former stomping grounds: The Typsy Mermaid. Open on select weekends throughout summer, this oyster and champagne pop-up has come back for a second go-around after opening to critical acclaim during the town’s arts festival earlier this year.

We had a chance to speak with Owner Cynthia Seaman about the concept, the food and herself while noshing on some incredible cuisine.

Before we get to the food, here’s your official Typsy Mermaid history lesson: The Typsy Mermaid is the brainchild of Cynthia and her partner David Ragnow, who own the event planning and design company Lasso the Moon. While traveling in Paris with friends for the holidays, the group brought up doing something fun for the Coconut Grove Arts Festival.

Given the duo’s events background, the idea of a pop-up quickly developed – and so did the idea of an oyster bar. The only things missing? A name and a logo. At the bar, one of Cynthia’s friends blurted out “The Typsy Mermaid” and that same day, they bought the website domain right there from the bar in Paris.

That left only the logo – Cynthia wanted a non-threatening icon. After some discussion, a mermaid made the final cut. “We were just talking and thought, “Who doesn’t like mermaids? Everyone loves mermaids!” Pearl, as Cynthia lovingly calls her, is a redhead – just like her – and is “a cross between actress Ann-Margret and Samantha on Bewitched. She’s a French mermaid drinking champagne from St. Tropez.”

The pop-up made its grand debut on 3415 Main Highway during Valentine’s Day weekend, which was great timing considering the main attraction on the menu. The initial menu was relatively straightforward, with just oysters, fried oysters, lobster rolls and champagne as the major items. It was such a hit that Cynthia had to open Lasso the Moon’s office (which was adjacent) to handle the overflow.

We never had the chance to check out the pop-up’s initial location, but as fate would have it, we got a second opportunity.

With Main Highway scheduled to undergo major construction, it didn’t make sense for The Typsy Mermaid to stay there. Fortunately, the owner of the Shoppes of Mayfair – a friend of Cynthia’s – offered them a spot at the now-shuttered Improv to set up shop temporarily. In just eight days, the team transformed the space at 3390 Mary Street.

And what a space it is: cozy, charming and welcoming. The color scheme – teal and white – fits the place perfectly. The vintage dishware is mostly Cynthia’s – an advantage of having your own events company. And the food… oh, the food.

Remember that menu we mentioned that just had a few items? Well, it’s gotten bigger. The oysters are still there, of course, flown in daily and set on rock salt to avoid tipping over and losing their brininess. But in addition to that and the no-filler lobster roll (paired with incredible green bean/haricot vert fries), you have a beautifully plated tuna taco trio and a hearty gazpacho that uses their own in-house smoked tomato juice.

AND OH MY GOD THERE’S A GIANT PRETZEL.

“Mermaids need salt, so we added a salty pretzel to the menu,” Cynthia said. The pretzel, first introduced during the arts festival, is beloved by kids, who also enjoy the mermaid theme thoroughly. “We’ve had some kids come in dressed as mermaids. It’s really cute.” 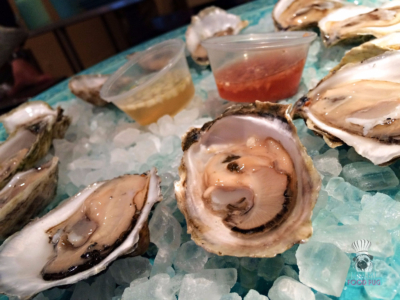 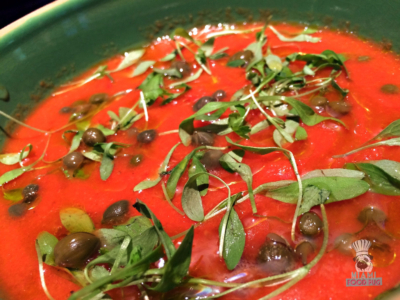 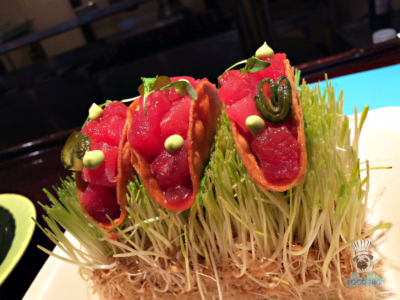 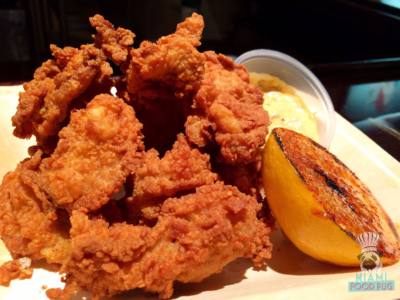 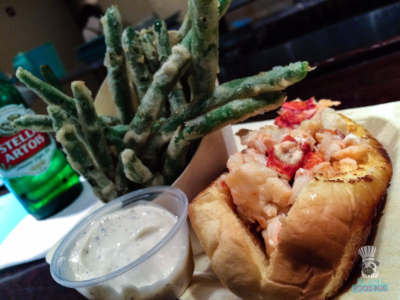 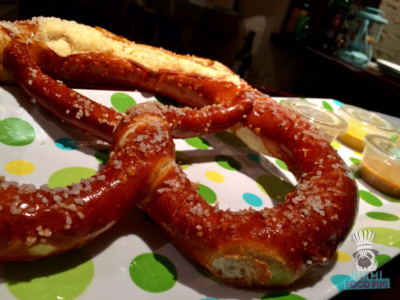 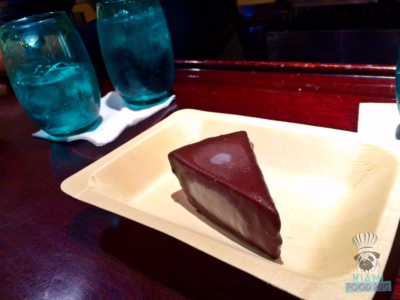 Leading the charge in the kitchen is Chef Michael Galadza, a Miami Culinary Institute graduate who has worked alongside culinary superstar Norman Van Aken. Chef Michael has an extensive background in working with seafood; he and his family played an instrumental part at Captain’s Tavern in Pinecrest, which is among the oldest seafood restaurants in the city.

Chef Michael started cooking at age 14 so that he could spend more time with his father, who served as executive chef of the restaurant for over two decades and spent much of his day there. While working there, Chef Michael moved up from busboy to working the line to waiter. He went on to study at MCI, meet Norman Van Aken and go down a path that eventually led him to Lasso the Moon and The Typsy Mermaid.

Cynthia’s culinary connections – she’s on the board of Slow Food Miami ­– has opened many doors for her, allowing for more opportunities to source local ingredients. This emphasis on local vendors is even evident in the bar program, which features area breweries like M.I.A. Brewing Company.

As for Pearl’s future, the restaurant is planning to open through the summer. What happens after that is still up in the air.

With that said, The Typsy Mermaid becoming a permanent fixture isn’t completely out of the question. But even if that were to occur, the pop-up would continue being open only on certain days of the week, according to Cynthia.

Regardless, we’re happy to have Typsy Mermaid while we can and Cynthia is happy to be back. In spite of the empty storefronts and shuttered retailers converting into more office space, she’s hopeful the Grove will see a resurgence soon – especially with the addition of new eateries like Lokal’s sister restaurant The Spillover.

“Even though there’s more office space now, I think it will bring in all the creative types who will stay and eat around here, which will bring more life to the area. It’s a snowball effect.“

Right now, she’s just focused on the next Typsy Mermaid weekend. In addition to its usual 4 p.m. to 9 p.m. Thursday-Saturday schedule, the eatery is opening up this Sunday (June 14) from 11 a.m. to 4 p.m. for its first-ever brunch service. Guests can expect endless Bellinis, lobster croissants with watermelon salad, and Bloody Marys with gator tail and pickled okra. To keep track of when Typsy Mermaid is popping up next, make sure to follow them on Twitter and Instagram.

The Typsy Mermaid is located at 3390 Mary St in the Improv at The Streets of Mayfair in Coconut Grove. For hour of operations and other information, visit their official website or call 305-668-9699.

3 thoughts on “The Typsy Mermaid: Quality Oysters and Champagne Pop Up in Coconut Grove”