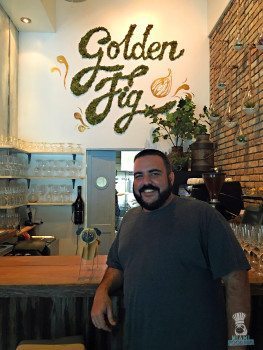 Having been big fans of Brickell’s OTC, we were sad to hear about its closing earlier this year. Thankfully, our disappointment was for naught: The concept that replaced our beloved Brickell haunt is a hundred times better. And that’s no exaggeration.

Since Golden Fig opened its doors this past summer, we’ve become regulars of the farmhouse cuisine restaurant. Executive Chef Tomas Prado and his team have developed a delectable market-based menu of regional and seasonal produce and pasture-raised meats, which has made OTC’s chicken parm grilled cheese and truffle steak frites wrap distant memories for us.

In fact, Chef Prado wants to make it clear that this is an entirely new concept.

“Our biggest challenge out the door was getting people to understand that this wasn’t OTC,” he says. “Some people still came in expecting the same food, so we had to explain to them what we were trying to do.”

Fortunately, the rustic, ingredients-driven menu by Chef Prado speaks for itself. Prado, who formerly worked in mortgage banking, has an extensive culinary resume, including Brickell’s My Ceviche and The Bazaar by Jose Andres. It was during his time at My Ceviche that he connected with OTC Owner Michael Sullivan to discuss OTC’s future — and the birth of Golden Fig.

What diners will now find at 1250 South Miami Avenue is more refined food with an emphasis on wine. The majority of ingredients are drawn from the southeast region of the U.S.; observant guests will spot the map of Florida on the wall that details where certain items come from. Other items are made in house.

“We’re a scratch kitchen,” says Prado. “We make our own ketchup and mustard, for example. People want to try housemade goods. We’ll make whatever we can in-house to please the guest.”

That focus on pleasing (and surprising) the customer extends to other parts of the Golden Fig experience, including bread service. There’s no dull bread service here: Chef Prado and his staff take in-seasonal products to develop something cool and different for guests to nosh on while they wait.

“We’ve done kettle corn, chickpea chips and eggplant dip in the past,” he says. “It all depends what’s in season. The same holds true for the menu.”

While the bread service and the restaurant menu change seasonally, there are certain items that visitors can always expect. According to Chef Prado, the Virginia ham croquettes and pork belly starter have received great feedback since the beginning; the tuna tartare and charcuterie program (another in-house creation) have also been well-received.

Right now, though, the restaurant’s focus is on the brunch menu, which launched last month. Although there is some carryover from the dinner menu (like the croquettes and pork belly), most of the items are new.

“OTC had a great brunch following, and we want to recapture that,” says Prado. “Developing the brunch menu allowed to play in the kitchen and come up with some great stuff. We have brunch staples like eggs benedict and huevo ranchero but also other, less-traditional items like cauliflower steak and Johnny cakes. It’s a nice mix.”

In addition to brunch, the restaurant is gearing up to host more events. Wine dinners and beer dinners with Sunset Liquors, Goose Island and other sponsors have already taken place, and more are in the works. For a restaurant that’s not even half a year old, Golden Fig is holding nothing back. But given the restaurant’s name, that shouldn’t be a surprise.

“Golden Fig is a strangler tree native to Florida,” says Prado as he explains the name’s origin. “Its seeds fall and latch onto a tree and take it over — they kill the tree. That’s kind of what we did with OTC. We took it over and made it our own.”

Golden Fig is located at 1250 S Miami Ave in Brickell. For hours of operation and other information, visit their official website or call (305) 374-4612.