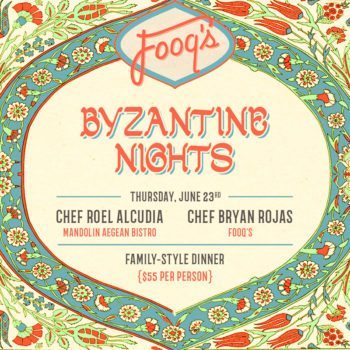 Last Thursday, Fooq’s latest collaborative dinner brought together two talented chefs for one memorable meal: Fooq’s own Bryan Rojas and Roel Alcudia of Mandolin Aegean Bistro. The family-style affair, known as Byzantine Nights, melded Middle Eastern flavors and was equal parts delicious and personal; it was like eating in someone’s home. Except with fire dancers, hookah and a DJ.

To say Byzantine Nights was a fun time would be an understatement. The mezzes started our meal on a high note; you can’t go wrong with bread and dips. Our favorites: the eggplant puree and tzatziki, which we couldn’t help dunking our crispy squid into (#lifehack). A refreshing watermelon salad was a light treat before the heavier fare, which included kebabs and whole fish.

The kebabs — Adoni Lamb and pomegranate molasses grazed beef – sat atop two types of rice, which included dill and English peas, carrots, cinnamon and sour cherries. All of these elements together made for a hearty, flavorful combo. The whole fish — local yellowtail snapper — was more understated than its meaty counterpart, but no less delectable. Full disclosure: this was our first time eating whole fish, and despite the creepy looking eye sockets, we would totally do it again.

Chef Alcudia finished the meal with one of our favorite desserts ever: Semolina Halavah (or Halva). We saw this on the menu and had no idea what it was. Well, now we know what it is: heaven on earth. This pudding/cake/ice cream dessert with honey doesn’t look like much, but this is a textbook example of not judging a book by its cover. It’s a shame there was only one for the two of us when we could have easily eaten 2…0. But seriously, if anyone knows where we can find this on the regular here in Miami, shoot us an email.

While this was a one-time event, Fooq’s collaborative dinners are not. Make sure to follow them on social media for updates on these dinners and other fun events. Having been to several other of these dinners, we can say with confidence that you won’t be disappointed.

Fooq’s is located at 1035 North Miami Ave in Downtown.  Call (786) 536-2749 or visit their official site for more information, including hours of operation.