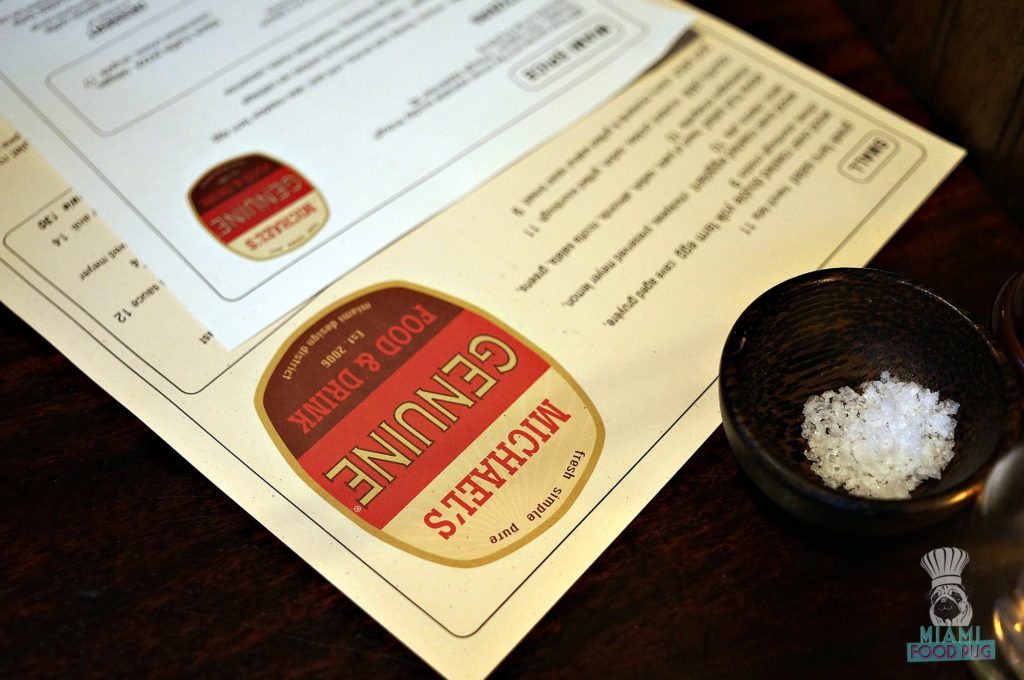 As Miami Spice starts winding down, some restaurants have changed their menu for September and aren’t touching it the rest of the month. That’s fine and dandy, but dining out should be a little more adventurous. Thankfully, Michael’s Genuine Food & Drink isn’t resting on its laurels: the restaurant’s Miami Spice menu continues to change regularly, offering guests a different experience each time — and a satisfying one at that.

For those unfamiliar with this Design District staple (shame on you), the restaurant has been serving up New American cuisine for about a decade now. In Miami, that type of longevity is pretty rare, so the neighborhood bistro is clearly doing something right. One bite from the Miami Spice appetizers is all it takes to realize why this place has been around so long.

Like we mentioned earlier, the menu changes regularly — often daily — based on available ingredients. But if they have the crispy rice cake and the pastrami beef tongue, don’t hesitate in ordering them. Both dishes are phenomenal. The rice cake, which features chorizo, Florida rock shrimp and a fried farm egg, is a playful creation that will blow you away — FLAVORS EVERYWHERE. The chili aioli adds a nice kick to the dish, too.

And the pastrami beef tongue … we could eat it forever. Tender with a slightly crisp exterior, the meat and seasoning are all on point. Don’t let the “beef tongue” part of the name creep you out — it’s so good you won’t care. If we had to vote on our favorite appetizers of 2016, these two would be at the top of the list.

There are supplements on the Miami Spice menu, but we found ourselves pretty satisfied after the starters. Just so you know, the supplements are cheaper versions of items off the regular menu. So if you’re doing Spice and see something you like from the usual offerings, check the Spice menu to see if it’s on there. You’ll save a few bucks that way. #yourewelcome

Michael’s Miami Spice entrees are just as unique as the starters. A housemade linguine served al dente introduced us to a lively flavor combination of prosciutto sausage, roasted peppers, olives and spinach; it looks beautiful and is large enough to share (we did). The wood oven roasted grouper, paired with citrus yogurt and couscous tabbouleh, is another distinctive dish that took our palate on a joyride. When you mix all the elements together and take a bite, everything just starts dancing along your taste buds. The progression of flavor as you chew is a lot of fun.

At this point in the meal, whatever room you have left in your stomach will determine the right dessert. If you’re stuffed, choose the buttermilk panna cotta. While it’s light and refreshing, it’s also rich; you still feel like you’re being a little naughty. Don’t forget to mix it with the accompanying figs and honey-thyme syrup for full effect. For those of us who have no shame (::raises hand::), pick the peanut butter chocolate torte and reward yourself with dense, rich chocolate and a banana ice cream worth every. single. calorie.

Miami Spice is an experience at Michael’s Genuine Food & Drink. Since the menu changes constantly, you never really know what to expect. But rest assured that your curiosity will pay off — it did for us.