This week, we’re featuring Nick and Teresa Sharp, Owners of Threefold Cafe, and their dogs, Sydney and Olive. 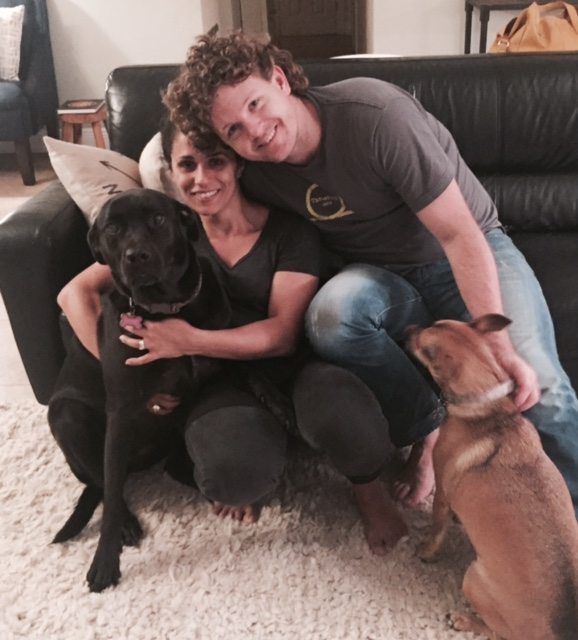 Your Name: Nick and Teresa Sharp

Your Pet’s Name: Sydney and Olive

Breeds: Sydney is some kind of terrier shepherd mix. All we know for certain is she is brown! Olive is lab/boxer with a little mastiff.

How did you come to own your dogs? What drew you to them?

Both dogs were adopted. Our neighbor fosters the pups until a suitable home is found for them. She walked Sydney by one night and said, “We named her Sydney because she looks like a dingo.” Totally played us on our homesickness at the time, so we adopted her and the rest is history!

Olive was easily lovable. She was the runt of the litter. To the eye, she looks like a lab; Nick owned black labs as a boy, so it was really a connection that he felt with her and a reminder of the great companions he had as a child.

What’s the story behind your dogs’ names?

Sydney was her name given by the shelter. Even though we are from Melbourne(!), we loved that she was named simply by looking like a wild Australian dog, so we didn’t change it.

Olive is completely black. Her coat is the color of Kalamata olives, so we called her Olive.

How would you describe your dogs’ personalities?

Sydney is very loyal and protective. She is fiercely energetic and fit, and she loves to be around you all the time. Nick is her alpha — she adores him.

Olive has quite a typical lab nature. She is friendly and playful. She loves to be around the children. She is very dominant at feeding time, but otherwise just a very chill dog.

How has owning dogs made your life richer?

They are so loyal and loving. It’s great to have them in the house as they have such great intuition. They brighten our moods all the time. The children especially have grown to learn the responsibilities of owning a pet, and their love for their dogs is amazing!

What is funny with our dogs is that Nick chose Olive and I chose Sydney, but Sydney responds to Nick as her alpha and Olive to me.

Sydney is the leader and the protector; she always has to know what is going on and be involved. Nick is exactly like this!

Olive is playful until she can’t be bothered anymore and pretty relaxed, which is more like me.

Tell us a funny story about you and your dogs.

One day, the pool cleaner left the yard gate open and the dogs got out into the street. At the time, they weren’t too street smart. We searched the neighborhood for them, up and down the streets, but couldn’t find them.

When we stopped and regrouped, we could hear horns tooting and people calling out and whistling. It turns out both dogs were over by our children’s school on Red Road. They had completely stopped traffic in both directions and were happily playing on the main road. They were completely oblivious to the chaos that they had caused, but thoroughly enjoyed the run around the neighborhood. We can laugh about it now …