This week, we’re featuring Ryan Egozi, Director of Operations for SuViche, and his American Bulldog, Brasco.

My friend found a litter, and I happened to stop by when he was bringing them home. It was way too many puppies for one person, so I did the right thing and took one off his hands. I chose the best looking one (of course) and the one I thought would be the smallest. Little did I know that I was in for a BIG surprise.

When I was given the option to choose, he’s the one that jumped right up to me when I bent down toward the litter of puppies. So it seemed only natural, plus like I said before, he was the cutest.

I was really into the movie Donnie Brasco at the time, and I felt he was kind of a gangster so I found a suitable name in my current environment and it stuck. Catchy, too, I thought.

My dog’s personality is a stark contrast to mine, which is unusual (the apple rarely falls far from the tree). I would describe him to be cranky, bratty, spoiled, hungry, entitled, but also loving, caring and honest. Hard to think of a dog as honest, but he just wants what he wants and isn’t afraid to tell you.

He will interrupt you on a phone call, in a conversation or while you’re watching TV if he wants something, including attention. He has this ridiculously loud and obnoxious yelp that he likes to do. He knows exactly what he’s doing and has an objective every time. 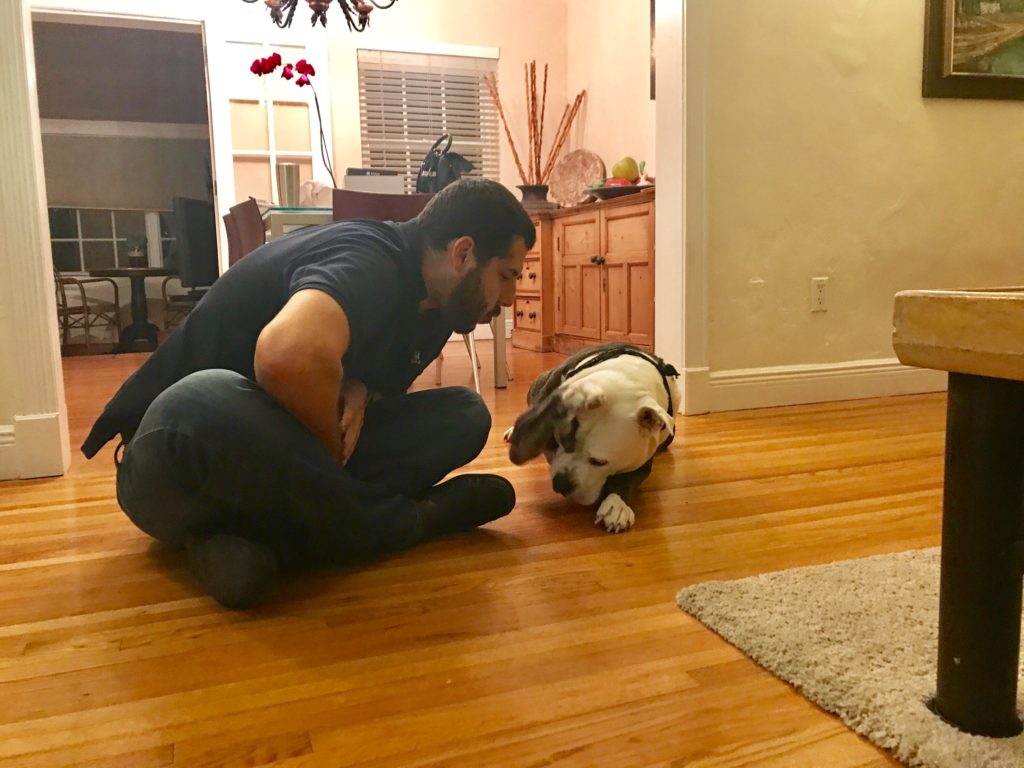 Besides the usual dog lover enrichments and stereotypical “I love my Dog” statements, it’s just nice to have someone (something) relying on you, loving you and waiting for you — another living being who enjoys your company, whether they be human or canine. It’s a good feeling.

I think in this particular case, my dog has spent so much time with my mother and brother that he’s more like a sibling than a son. We fight, argue, get mad at each other and then make up. For example, he’s not allowed in my room or on my bed, partly because he’s almost 120 pounds and takes up all the space. But more importantly, it’s because he’s an entitled brat who thinks he’s 15 pounds and likes to take up the whole bed, and he gets angry when you try to take back your own space.

Brasco hates to be walked. He despises physical activity, but he knows he HAS to; he refuses to do so if it’s not right after a meal. He also has preset lengths and times, and if you try to deviate from that, he stages a sit in. He has his routine around the block so if you even try to go several feet or minutes more, he flat out refuses.

Many times, my friends, family and neighbors have witnessed me fighting tooth and nail (to no avail) to simply move him from a corner down the block. Once he arrives at where he wants to be, he will literally sit down and remain stationary, immovable even until he feels we are going in the direction and to the location where he wants to go. That’s a REGULAR occurrence for the record; I know it’s not a single story but it happens too often and it’s really funny every time.

Unfortunately not. I support the Humane Society whenever possible and will always adopt when looking for a new best friend.

My favorite by far is your page.