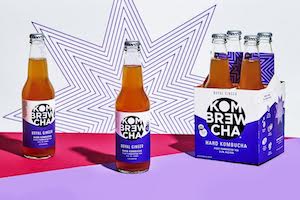 Join Kombrewcha to celebrate International Women’s Day and Women’s History Month! Throughout the month of March, the world’s first hard kombucha will celebrate female entrepreneurs by partnering with women owned and operated bars and restaurants in New York and Miami to raise awareness for gender equality. 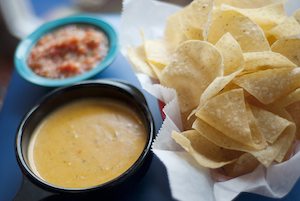 Chuy’s, one of the most beloved Tex-Mex restaurant concepts, is opening its first South Florida
location in Doral on Tuesday, March 13, 2018. The opening will mark the 9th Florida location and 91st restaurant overall for the established brand, which opened its first restaurant in Austin, Texas 35 years ago.

To celebrate the grand opening of their new location, the restaurant is offering free Chuy’s for a year to the first 50 guests in line when they open at 11 a.m. on March 13. For the first four weeks of opening, diners have the chance to discover a lucky Golden Ticket in their silverware with a variety of offers to enjoy including a free appetizer, entrée, tres leches and more.

The menu offers an explosion of flavors, featuring authentic dishes crafted with hand-rolled tortillas made fresh all day on a traditional comal in the dining room. The recipes come from New Mexico, the Rio Grande Valley, Mexican border towns, South Texas, Austin, and beyond.

Sure to become a go-to destination to wind down after work, the one-of-a-kind Happy Hour at Chuy’s will be offered Monday through Friday from 4PM to 7PM – featuring a variety a drink specials including scratch- made margaritas with fresh-squeezed lime juice and hand shaken Texas martinis. Chuy’s will serve up the best Happy Hour deal in town, their famous Fully-Loaded Nacho Car; a free build-your-own nacho station housed in the trunk of a vintage car loaded with fresh chips, salsa, queso, beans and ground sirloin. 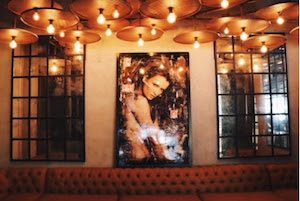 Le Chick (pronounced Le Chic) is officially open in Wynwood. Inspired by Rotisserie Amsterdam, a Dutch hotspot made famous by its rotisserie chicken, burgers and a cocktail bar, Le Chick will be a destination for craft cocktails and elevated comfort food served in a welcoming atmosphere.

Brought to Miami by Co-Founders and Managing Partners Coco Coig and Jorge Sanchez, along with Managing Partner Max Van de Put, Le Chick aims to be the destination of choice for young creative professionals in and around Wynwood who are looking to experience a welcoming casual dining environment paired with great cocktails. The interior of the fast-casual eatery has kept the industrial look and feel of its Dutch counterpart, but added a dash of Miami warmth and flair.

Newcomer and Executive Chef Victoria Delloca, who got her culinary start in the kitchen at Vail, Colorado favorite Sweet Basil, before moving to Miami and joining the team at BB Bistro, will lead Le Chick’s culinary program. The menu, which takes inspiration from Le Chick’s Amsterdam counterpart will feature comfort foods with a modern twist.

A special late-night menu will also be available after 12PM, when guests munch on burgers including the Big Double Dirty and Royale With Cheese, sides like Onion Rings and Coleslaw, as well as Carrot Cake. 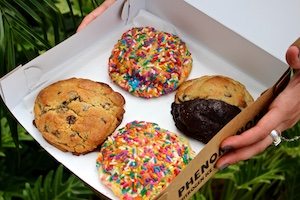 South Florida-based dessert company, PHENOMENOM, is pleased to announce the opening of its latest storefront, ‘PHENOMENOM Cookies,’ which is slated to open in Miami Beach this month. The brainchild of 26-year-old owner and visionary, Chuck Woodard, PHENOMENOM Cookies marks the third South Florida location for the brand.

“Once we mastered the nitrogen ice cream process, I introduced cookies to the menu and quickly realized we were onto something special. Our cookies have quickly become a cult favorite and true staple of the brand,” quotes PHENOMENOM owner, Chuck Woodard.

PHENOMENOM cookies are made from scratch and baked fresh daily to perfection in-store. The mouthwatering cookies measure six-ounces each, with a distinctly gooey texture, thanks to a homemade secret batter recipe held close to home. Flavor options include classics such as Chocolate Chip and Sugar cookies, plus crowd favorites such as M&M-Oreo and S’mores.

Additional offerings at PHENOMENOM Cookies include a ‘milk n’ cookie’ option, encouraging guests to satisfy their childhood cravings and dunk the mouth-watering cookies right in. An espresso menu offering a variety of coffee creations will also be available, in addition to a grab-and-go fridge of soft drinks.

Featuring 550 square feet of space with walls adorned in colorful geometric patterns, PHENOMENOM Cookies will serve as a lively, grab-and-go dessert destination. The concept will cater to Miami Beach locals, tourists on-the-go, and foodies seeking late-night munchies. With a growing demand for out-of-state shipments, PHENOMENOM has a web store in development, which will soon offer a streamlined cookie shipping service for customers nationwide. 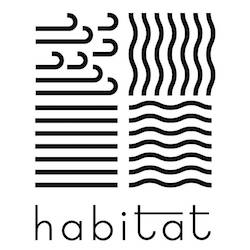 On Wednesday, March 14, guests will be able to join Mendin and Tsumura at a special cocktail reception featuring a welcome drink and an array of passed hors d’oeuvres curated by Mendin. Developed with the community in mind, this approachable reception welcomes visitors and locals alike to sit back, relax and spend time with Mendin and Tsumura in an inviting, laidback setting. Tickets are limited for this soiree and are priced at $50 per person (excluding service charge and tax). The evening will begin at 8PM and will take place at Elements, Habitat’s chic, 2nd level cocktail bar and lounge.

Tsumura is widely-regarded as the mastermind who introduced Nikkei cuisine to the world. On Thursday, March 15, Tsumura and Mendin will go into the Habitat kitchen for a special collaborative dinner. The exclusive eight-course event will feature dishes by both chefs as well as combined efforts, all paired with select wines. Seating is limited and tickets are priced at $275 per person (exclusive of tax and service). A brief cocktail reception will begin at 7PM; guests will be seated at 7:30PM sharp.

Tickets for both events can be purchased at https://www.exploretock.com/habitatmb/. 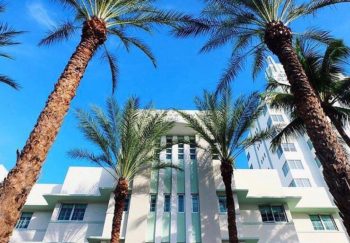 Taking place at The Social Club, the South Beach “daily brunch” restaurant in the heart of Collins Avenue, the spirited event will showcase unique cocktails featuring Luxardo ingredients by twenty of the area’s hottest bartenders.

Starting at 4PM, the evening will kick off with an exclusive welcome cocktail reception featuring light bites expertly crafted by The Social Club’s Executive Chef Jeffrey Williams, and a “How to Luxardo” session by Luxardo’s own Brand Ambassador Matteo Luxardo, followed by the bartender competition at 6PM. The event will be judged by local media VIPs Eat This! Drink That! Go!’s hosts Jimmy Cefalo and Brenda Bassett, United States Bartenders’ Guild Miami president Marita Leonard and the event’s special guest, Matteo Luxardo. 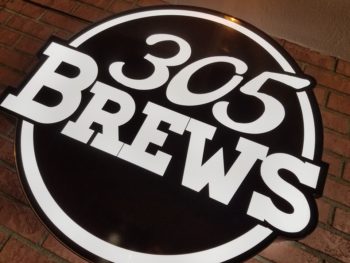 305 Brews has announced the launch of two new live music nights on Fridays and Saturdays. On Fridays, beginning at 8pm 305 Brews will help guests get the weekend started with some Cuban Jazz inspired sounds by Los Havana Knights. On Saturdays, the live music continues as Uma Galera plays on the patio with their Acoustic Dub Sessions beginning at 7pm.

Pineapples & Pizza, the delicious monthly series at Matador Bar, is returning on Thursday, March 15. The event offers a rotating off-menu pizza paired with a boozy Pineapple cocktail to provide a savory experience every month. Guests are invited to bring a friend, share a pizza, sip a cocktail (or a few) and jam to live music by Brika from 9PM until 11PM. This month, guests may indulge in the Kale Pizza topped with Spicy Sausage as they sip the Absolut Elyx Pineapple cocktail for $35.

Dance the night away with the alt-soul, sounds of the South Florida native, Brika, who has performed with the internationally-known DJ Kygo. 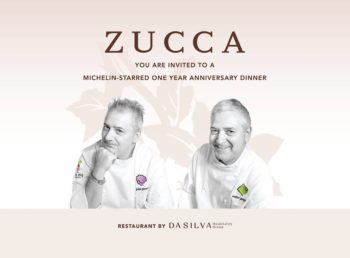 Chef Walter Ferretto is recognized for leading the kitchen at Il Cascinalenuovo. Achieving international acclaim, his recipes have been published in popular Italian cookbooks, and he has participated in renowned events, like Turin’s 2006 Winter Olympics, and the Piedmont Food Festival in the Delegates Dining Room at New York’s United Nations Headquarters.

Having served in kitchens throughout Europe, Latin America and the United States, he incorporates influences from a diverse collection of cuisines. Chef Fulvio Siccardi has perfected his craft in cities across the globe from Madrid to Tokyo and is the recipient of two Michelin stars for his work at Le Clivie di Piobesi and Conti Roero. Siccardi’s goal is to deliver the perfect balance between tradition and innovation in each dish he serves. Together, Ferretto and Siccardi will unite their culinary talents to present an unparalleled evening.

Accompanying each course will be an optional wine pairing by Marchesi Antinori-owned Prunotto. For those who cannot attend the exclusive dining experience, both visiting chefs will be preparing a selection of rotating pasta specials – using their own line of artisanal pasta, I Tre Chef – available during lunch the week of March 12.

The price is $85 per person and reservations can be made here.

Take your taste buds on a tour of South Africa at the casual yet sophisticated Big Easy Winebar & Grill, with daring new temptations now available at lunch and dinner. Located at Miami’s Brickell City Centre, the restaurant is a premier dining destination offering guests a taste of authentic South African cuisine, featuring prime cuts of meat and seafood fresh from the South Atlantic and Indian oceans.

Dig in to unique flavors with the Burgers section ($16-$20) with choices like the Mushroom Burger with marinated mushrooms, blue cheese, crispy potato sticks, frisse and horseradish cream; Spicy Truffle Burger with lemon truffle aioli, goat cheese, roasted red pepper, cowboy candy and grilled romaine; and the Impossible Burger™ – a meat lovers’ miracle with all the flavor and protein of a beef burger, but made from plants.

In a rush? Bustling shoppers or time-strapped professionals can enjoy Executive Lunch, available Monday through Friday from 11AM to 3PM. Guest’s choose from a selection of entrées with a choice of either a glass of Big Easy wine or dessert. 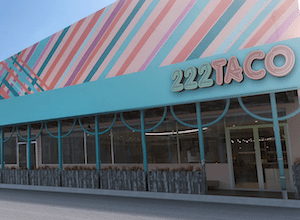 With 4,000 square feet of indoor space, plus a 700 square foot patio, the vibe-driven eatery will offer an authentic menu of traditional Mexican fare, along with La Margarita Shop, a full-service bar shaking up a selection of Robbins’ signature margaritas. On the menu, guests can expect dishes that stay true to the integrity of the country’s flavorful classic cuisine, along with a variety of vegan options. 222 TACO will also feature a ‘tiendita’ stocked with authentic Mexican novelties, grab-and-go offerings, imported sodas and beers, baked goods, coffee, and paletas, in a variety of flavors.

222 TACO is brought to life through a passion for Mexican cuisine, design, and culture. A California native with discerning taste for all things Mexican, Robbins will play a key role in conceptualizing the food and beverage menus, infusing authentic recipes, imported goods, and a love for Mexican culture into the project.

222 TACO will provide an experience for the community and beyond, offering a warm, family-style destination by day, while transitioning into a lively neighborhood hangout by night. Inspired by a love for the arts, Robbins will tap into her event expertise and company, 222 Worldwide, driving the music programming at 222 TACO. The hip ambiance will feature design elements such as colorful Oaxacan tile, Mexican embroidery, neon signage, and traditional iconography throughout the space.