‘Burger at the Bar’ at Three 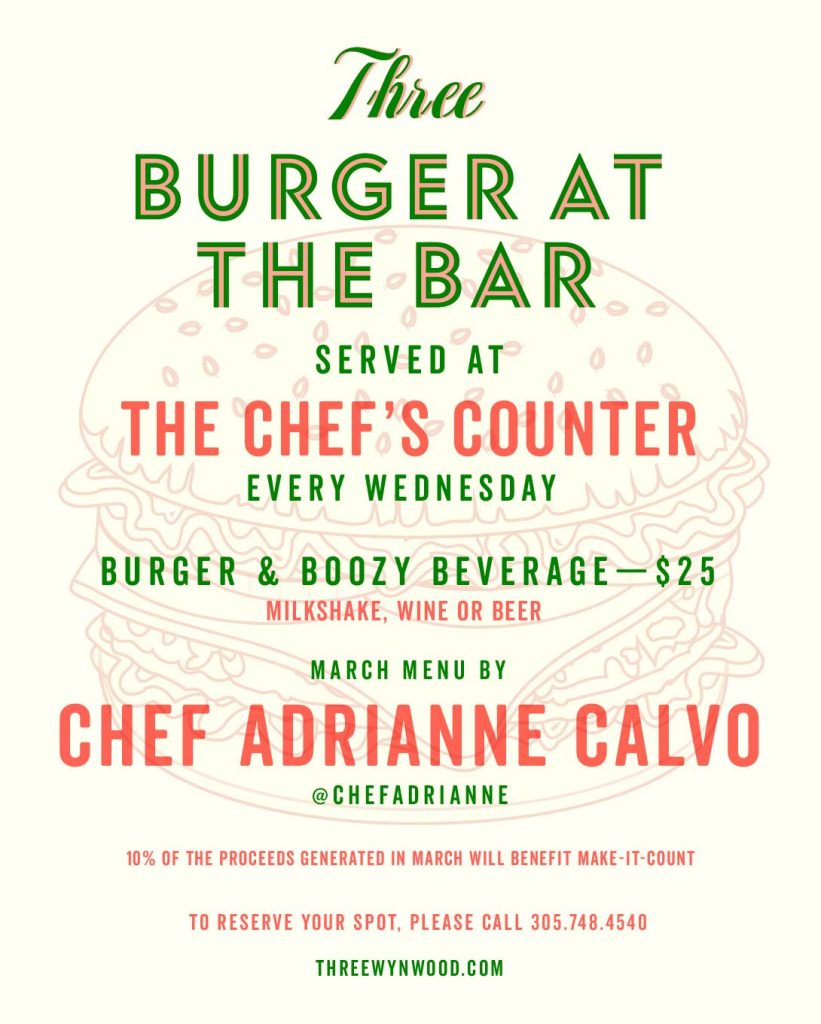 Wynwood’s Three by Chef Norman Van Aken is launching its new monthly “Burger at the Bar” program where every month the restaurant will partner with a different Miami personality to curate a creative burger and boozy milkshake duo that will be offered exclusively at the restaurant’s Chef’s Counter every Wednesday night of the month for $25.

In honor of Women’s History Month in March, Three partnered with Miami’s all-star Chef Adrianne Calvo who will bring her signature “Maximum Flavor” style of cooking to Wynwood on Wednesday, March 20 and 27th.

To kick things off, *Chef Adrianne will be on-site at the Chef’s Counter at Three next Wednesday, March 20 serving her classic burger recipe and boozy milkshake which will feature two grass-fed, hormone-free beef patties, topped with fresh red onions, sliced pickles and a home-made dijonnaise sauce, served on a toasted Zak the Baker brioche bun. The dish ($25) will be accompanied by natural cut thin fries and Chef Adrianne’s very own Double Vanilla Malt milkshake…spiked!

Ten percent of the proceeds generated in March from Three’s “Burger at the Bar” events will be donated to St. Jude Children’s Hospital by way of Chef Adrianne’s foundation, Make-it-Count. 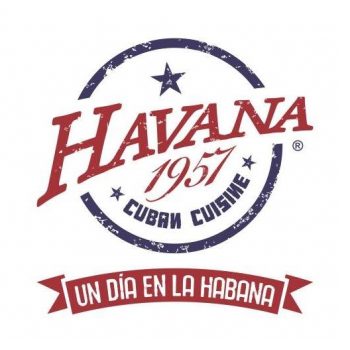 On March 22, 2013, Havana 1957 opened its second location on the Pedestrian-friendly Lincoln Road. The goal was to bring the glamour and glory of Cuba in the 1950s to the streets of Miami with simple but delicious traditional Cuban cuisine.

Paying tribute to its loyal patrons, Havana 1957 on Lincoln Road will celebrate its sixth anniversary in with a seven-day birthday extravaganza. Open to the public, guests can stop in any day of the week between Monday, March 18th through Sunday, March 24th.

Mojo and Mojito Pairing: With the purchase of any dish with mojo as ingredient, guests will receive a free mojito on the house. The special includes the Mojito Clasico with Barcardi Superior Rum. 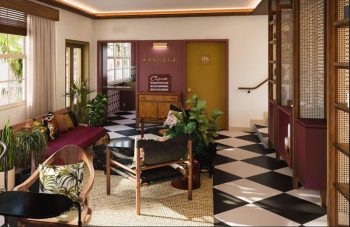 Life House Little Havana, the first boutique hotel to open its doors in the historic neighborhood, is proud to announce the opening of Parcela, its signature veg-forward cafe serving locally inspired fare, on March 22.

Located on the first floor of Life House Little Havana, Parcela celebrates the neighborhood’s local flavor with a modern plant-forward approach inspired by the urban agriculture movement of Havana, Cuba. The cafe draws inspiration from Miami’s rich fabric of Latin cuisine to inspire fresh plates and combinations, many of which are vegetarian and vegan.

Parcela will serve breakfast daily from 7-11AM, which will include hot dishes like Mallorca, free-range eggs, Proper Wynwood Porter Sausage, white cheese and a sweet mallorca bun; Florida Aguqcate a vegan dish with True Loaf Multi-Grain Toast, Florida avocado roasted tomato, cucumber and hemp seed mix; as well as an assortment of pastelitos like the Frita Pastelito and Pastelito de Mamey con Queso, which is also vegan.

For lunch and dinner, guests can order from a selection of salads, sandwiches and bowls available on the cafe’s all day menu from 11AM-9PM. Latin-inspired favorites like the Pan con Bistec which diners can order with Churrasco or Adasha, for a vegan twist on the classic Cuban sandwich, and the Havana Club Sandwich with ham, chicken, white cheddar, lime aioli, tomato, Proper Bacon, Hammock Farm Greens and served on True Loaf Whole Wheat Bread are can’t miss choices.

The neighborhood cafe will also have a biodynamic, natural and organic wine program featuring wines produced in Spain and Latin America that are crafted with sustainable practices in mind, and a rotating list of locally crafted beer. The creative direction for Life House’s Miami culinary and bar programs comes from Brian Griffiths, who previously worked at Freehand Miami Broken Shaker. 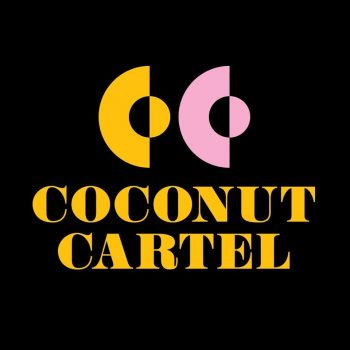 One Last Pina Colada, sponsored by Coconut Cartel, pop-up will showcase unique twists on the classic piña colada. With rotating flavors every week throughout the entire month of March, the ventanita will feature collaborations with local Miami culinary brands such as YOKO matcha, JoJo’s Tea, La Carreta Coffee and Chinola Passionfruit Liqueur. All flavors are made from scratch in collaboration with Wynwood brand and Dasher & Crank ice cream shop.

Coconut Cartel combines rum aged in Guatemala by some of the world’s best rum makers with coconut water creating a smooth, rich taste that is unlike anything available on the market. The pop up will be open from 5 pm + on Thursday-Friday and at 2 pm+ on Saturday-Sunday. Closed Monday-Wednesday. The last day of the pop-up is April 14th. 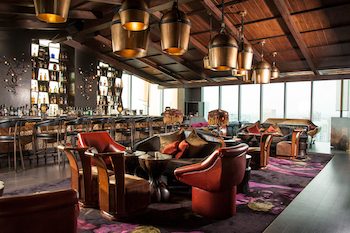 Located high above the bustling streets of Miami’s metropolitan Brickell neighborhood, EAST, Miami’s exclusive lounge, Tea Room, transports guests to Hong Kong with its Asian Night Brunch, a carefully-curated menu that tantalizes the senses and puts each guest in charge.

Priced at $88++ per person the two-hour dining experience encourages guests to select one dish from each category offered on the five course tasting menu and pair it with their choice of free-flowing champagne, wine and beer. Now guests can also enjoy a hand-picked selection of Joto Sake, perfectly paired with each course to enhance the experience, for an additional $12.

The customized pairing offers five unique sakes starting with Shichi Hon Yari, Junmai “The Seven Spearsmen,” made at the 3rd oldest brewery in Japan, the Tomita Brewery, which was founded in the 1540’s. The experience continues with Yuki No Bosha, “Yamahia” Junmai, “Old Cabin” that unlike most yamahais, which are gamey and funky, is mellow and elegant, followed by Hou Hou Shu, Rosé Sparkling Sake, “Rosé Clouds,” a sparkling sake brewed with rose hip and hibiscus to produce its pink color and dry finish.

The pairing concludes with Joto Junmai, Nigori “The Blue One” which unlike most nigoris, shows depth and earthy notes, making it more food-friendly and sophisticated, and lastly Joto Yuzu “The Citrus One” which is made by blending local, Shimane-grown yuzu juice with junmai sake, giving it a lemony taste.

BC Bazaar Series at Burlock Coast

Burlock Coast invites guests to sip, savor and shop at the BC Bazaar series this Saturday, March 16. Enjoy complimentary bites and rum punch tastings while you stroll the many vendors participating in the Bazaar. Vendors include but are not limited to: