An old colleague of mine’s dog had a beautiful six-pup litter. After he had trouble finding homes for three of them, two staff members and myself decided to help out. My husband Renzo and I met three beautiful 11-week-old puppies in Wynwood on October 2015, right across from Bar Next Door. I couldn’t pick just one honestly — I wanted to keep them all. I originally wanted to pick the girl of the litter, but I knew Luke was the one when Renzo picked him up and fell asleep in his arms.

Luke was originally named “Dough Boy,” but Renzo chose Luke almost immediately after meeting him. I wish I could take credit for this answer, but it was all him. It’s definitely a Star Wars reference. At home, we call him different things but mostly Lukey. We have a funny nickname for him, too: “Lukey Potongui.” It’s an inside joke that would take forever to explain, but it has to do with how he walks and moves his hips from side to side.

Luke is one of those playful, restless pups, and he has always been that way. He has an appetite for speed just as much as for baby carrots and antler chews. He loves to be under cozy blankets and will never wake me up; he loves to sleep in a lot. He is stubborn when he wants to be, but if treats are involved, he is the best boy and will give you high fives endlessly. When I wake up, he asks for belly rubs and will stretch for some time; it’s his way of saying, “Five more minutes please.” He loves making new friends and always remembers the names of his old friends.

One thousand percent, yes. I never grew up with dogs — my mother wasn’t really much of a pet lover until Luke. So of course once I moved out and was settled in, my first thought was that I wanted a pet. Like other dog owners will say, he’s more than a pet to me; there is a deep connection that is hard to describe.

For me, I can say I know how he feels just by looking at his eyes. He can feel when I am sad or hurt as well, and we always comfort each other. By the end of every day, the first thing I want to do is come home to Luke. On the weekends, I spoil him by taking him to dog parks all over town. 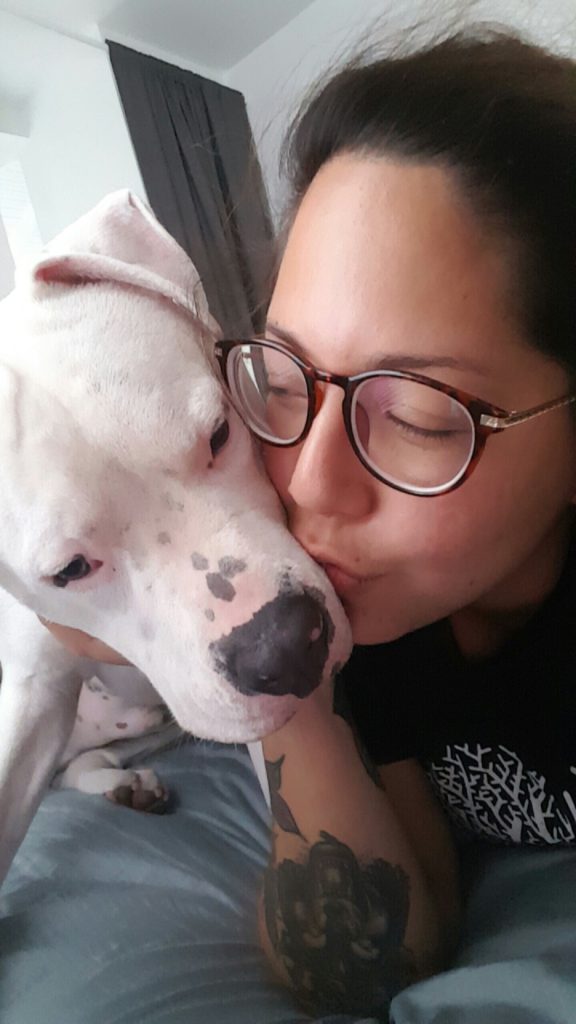 This is a funny question because I always say Luke is half Renzo  and half me. He is like Renzo in the sense that he is outgoing and always has so much energy. He smiles all day, and it’s almost contagious. They’re also similar in the sense that they enjoy their down time just as much. We are alike in the sense that we always drool for anything that is edible. Were both super clumsy, too.

There are so many stories to tell — I can’t think of one that stands out as funny per se. He is so clumsy most of the time that a lot of the “funny” stories involve him being in an unwanted situation. The other day, he was playing outside by himself and then a cat came out of nowhere! Luke didn’t know how to react since he has never been face to face with a stray before. The cat hissed at him and smacked him in the face and ran away. Luke was confused and didn’t know what to do; he just came running back home.

At the moment, I am not. However, it is something that I would like to be part of. I am not too familiar with organizations around me, but now that I think about it, it’s making me want to draw attention to that. I am a huge animal lover and definitely need to be involved.

I enjoy @TheDogist, a photo documentary series about the beauty of dogs based in New York. I have a love for street photography and dogs, so I am constantly browsing that account on my free time. I always imagine myself as TheDogist, and sometimes think about starting a similar account in Miami. Oh yeah, I also enjoy @PopEyeTheFoodie account; he is such a little cutie pie eating in all kinds of cool places.