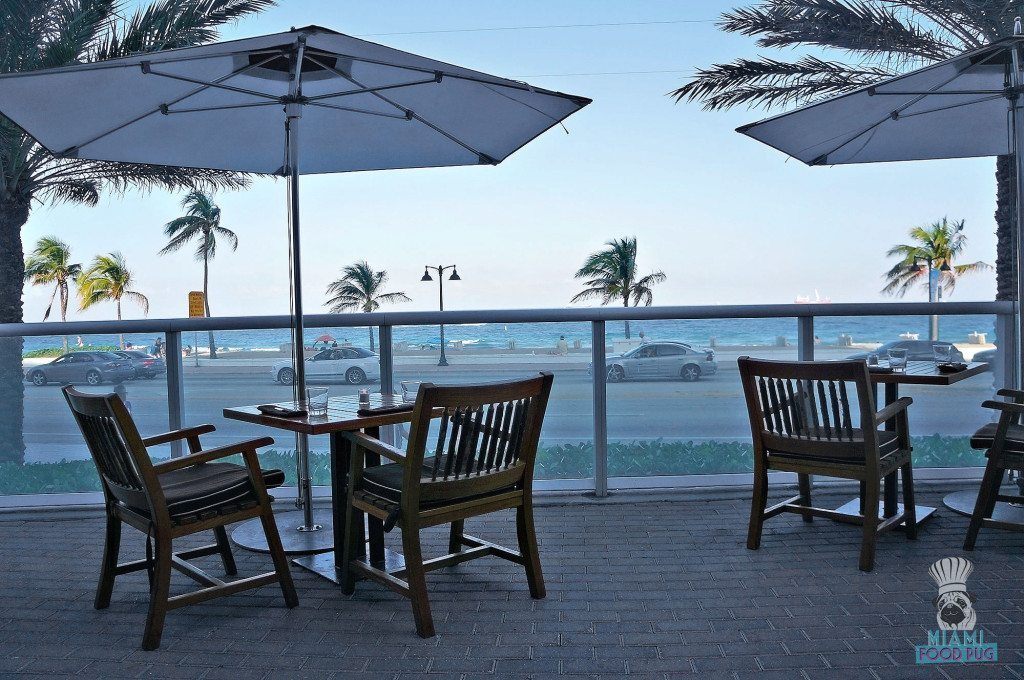 There are restaurants, and then there are Stephen Starr restaurants. If you’ve had the good fortune of experiencing the latter, you know that a Starr restaurant is equal parts style and substance. Not only do the locations look cool, but just as much attention has been paid to the food and service. All those elements combine to make one heck of a meal.

Steak 954, the Starr property in the W Fort Lauderdale, is the third Starr concept we’ve visited; Le Diplomate in Washington D.C. and The Continental on Miami Beach popped our cherries last year — and did so with some incredible food. There’s a reason these restaurants are among the hottest seats in their respective towns.

While Le Diplomate wowed us with its Parisian decor and the Continental piqued our interest of tiki culture, Steak 954 is a more traditional steakhouse. But as you’ll soon find out, it’s no less awesome than its peers.

As the name implies, red meat is the star of the show at this ocean-front eatery. So when we arrived, we knew what we needed to get: lots and lots of beef. But while you should get steak, make sure to get some seafood as well.

We were originally sticking to just meat — I mean, the place is called STEAK 954 — but our server talked some sense into us and actually led us down a fish-heavy route. And for that, we are so so so so so so thankful.

Here’s why: foie gras and tuna tacos, hamachi crudo and snapper tiradito. If possible, get all three. If not, get the tacos and the snapper tiradito. The foie gras and tuna tacos may look small, but there is a lot going on. The thick shells are loaded with foie and tuna that will have your taste buds in a state of pure, unadulterated joy; throw on the house-made jalapeños for some added fire.

We dedicate this entire paragraph to the local snapper tiradito. If we were any good at poetry, we’d write the thing a sonnet. What really brings the dish full circle is the sweet potato. Gobble that up with the snapper in one bite, and they’ll have to slap that stupid grin off your face. There’s something about the sweetness of the potato with the acidity of the dish that culminates in a unique and ultimately satisfying bite.

Staying on the meat train, we received our steak at this point in the meal. Our monstrous New York strip  — cooked medium rare — is a sly bastard. The flavor really sneaked up on us here. At first bite, the steak was nothing to write home about. But as we kept chewing, the more flavor we extracted and the more we enjoyed it. By the last bite, we wanted another one.

Fortunately, our other entree — the miso black cod — was up for the challenge. Unlike the steak, this dish delighted our taste buds right from the start; you taste the honey and miso immediately. And the fish… uber fresh and tasty. In the battle of surf and turf, surf won this round.

A special note on the sides: get them. Sorry for ordering you around a lot during this article, but you NEED to try these sides. Anyway, we loved the tots. We would eat them breakfast, lunch or — in this case — dinner. And the smoked cauliflower and kale? Sleeper hit. Tender, flavorful and smoked in house, the greens (and whites) helped us get some healthy-ish stuff in our stomachs without skimping on taste.

For desserts, we trusted our server. Here’s the thing about service here: they know their shit — and they know their clients. We’d expect nothing less from a restaurant of this caliber. Not sure how our waiter knew we wanted the key lime Baked Alaska or the Chocolate Souffle, but he nailed it. And he nailed the dessert choices for our neighbors, too.

The baked Alaska had the right amount of lime zest, and the blackberry and mint soda on the bottom were stellar supporting acts that really enhanced the dish. The souffle featured an excellent fusion of chocolate that had the sweetness of milk chocolate but still a little bitterness from the dark stuff.

Don’t forget to take a piece of Steak 954 home with you by ordering the cookies to go aka legal crack. You get three types of cookies made to order: chocolate chip, oatmeal raisin and white chocolate macadamia. Two weeks and a half weeks later, we’re still nibbling away at them.

It took us a while to make it out to Steak 954, but the restaurant was well worth the wait (and the drive to Broward). Now if they’d only open a Steak 305…

Steak 954 is located at 401 N Fort Lauderdale Beach Blvd inside the W Hotel in Ft. Lauderdale. For hours of operation and other information, visit their official website or call 954-414-8333.

One thought on “Steak 954: More Than Just a Great Steakhouse”