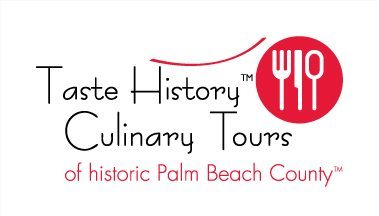 If you’re new to an area, a food tour is one of the best ways to get acquainted with local eats. We’ve been on our fair share of culinary tours, and they’ve always been fun and insightful. Even if you think you know a neighborhood’s eateries inside and out, a food tour will open your eyes to new experiences and perspectives. And that’s exactly what happened on our first Taste History Culinary Tour.

Taste History turns the food tour concept on its head by focusing on much more than just food. Not only do you learn about restaurants and their offerings, but you also learn a lot about the neighborhood itself. We recently embarked on a Taste History tour of Lantana and Lake Worth, two areas that — to put it nicely — seemed like total snoozefests before this tour. When we think of good food, those two spots would not be on the top of our “to-do” list — they would be nowhere on it.

But it turns out that there’s plenty more to Lantana and Lake Worth than meets the eye or palate. A quick primer on Taste History before we talk about our specific tour: Taste History tours take place every Saturday of the month and are offered year-round. Expect to visit a handful of eateries as well as cultural shops and other venues within the specific destination; each weekend visits a different neighborhood.

While a portion of the tour takes place aboard the bus, wear comfortable shoes since you’ll spend more time walking than anything else. And that’s a good thing because you get your money’s worth in food — and then some. Our very filling journey started with Mother Earth Sanctuary Cafe, which looked very mythical from the outside. We had no idea what to expect from this place.

What we got was a ridiculously good turkey burger and a chocolate mousse parfait that set the tone for an epic afternoon. The cafe is cozy and run by a strong independent female owner named Patti Lucia, an absolutely incredible woman whose story fascinated us. That artwork hanging around all over the cafe? All made by her with spices — no paint involved. The burgers are named after elemental things as well as her interests: the unicorn burger, the fairy burger and the Tesla burger are just a few of the items you’ll find. While there are meat options, the vegetarian and vegan options draw the most attention.

Next up: The Lake Worth Art League. As you can probably guess from the name, this is not a restaurant. It’s a local art shop that hosts painting classes and other community happenings. Like we said earlier, Taste History doesn’t just focus on food; you also get a taste of the area’s culture and past — the art league being a major part of that; it’s been around since the 1920s and is still going strong.

Nearby this stop was The Taco Lady. another Lake Worth staple. Having set up shop about 14 years ago, the taco lady  — yes, she’s also an actual person — is cranking out legit tacos and other authentic Mexican fare like she runs the place (she does). Not only is the food delicious, but it’s also reasonably priced for the portions. It’s a small shop, so you may have to get your food to go, but it’s soooo worth it.

Our next two destinations — Java Juice Bar and Artisans on the Avenue — furthered the tour’s mission of letting us “taste history” with a taste of healthy juices and wraps along with some captivating arts and crafts. We picked up a few trinkets for cheap at the latter, and if you love handmade goods, it’s a store you need to check out since featured artisans change regularly.

The final attractions on the Lake Worth part of the tour ended on a high note. With chocolate and BBQ, how could it not? We gained 10 pounds just walking into Hoffman’s Chocolates and looking at their extensive selection of items from giant chocolate bars to chocolate-covered pretzels to chocolate-(insert food here). Blue Front Grill and its pulled chicken, baby back ribs and Mac ‘n cheese helped counter the sweetness from the previous stop. Make sure you visit the backyard. It doesn’t look like it from the outside, but holy crap it’s hugeeeeeeeeeeeeeeeeeeeeeee. And really nice, too.

In Lantana, we had the opportunity to visit the local arts district and end our Taste History experience at The Cheese and Wine Cafe, which focuses on … you get the idea. That’s not all they sell, though: Expect to find a mix of Spanish, French and Italian influence across the menu, which is large. Our favorite bite there: the Greek Rice Bowl (Basmati Rice with arugula, cherry tomatoes, Feta Cheese, sliced hardboiled egg, chopped onions, carrots, cucumbers, green pepper, almonds and Israeli spice mix.)

If you’re still reading this story, we commend you. It’s a bit longer than our usual pieces, but there’s a reason for that: to drive home the fact that Taste History really really really really delivers a quality tour experience. They were able to turn Lantana and Lake Worth —  towns we weren’t very interested in — into places we’d visit again on our own time. We live in Miami, so that says a lot.

On the fence about trying a food tour? Taste History will make you want to take one in every city. Goodbye, summer body.