Executive Chef-Owner Mariano Araya is pleased to announce the opening of his Mediterranean concept, Casa Mariano, on September 18, 2021. At Casa Mariano, Chef Mariano will share his personal style of cuisine with a menu representing an impressive career, drawing inspiration from his most beloved dishes.

The menu at Casa Mariano will feature Hot and Cold Appetizers, Salads, Pastas, as well as different choices of Entrees, Steaks, and a special selection of Chef Mariano’s suggested house specialties – all made with the highest-quality ingredients sourced from local farms whenever possible.

The beverage program at Casa Mariano is spearheaded by General Manager and Sommelier, Victor Tapia, who left a previous career in telecommunications to dedicate his life to the conviviality and passion of hospitality, food, and wine. He has developed a creative and exciting list of exceptional wines to pair with Chef Mariano’s dishes.

In addition to the thoughtfully curated wine list, Casa Mariano offers innovative wine-based, craft cocktails with a nod to the classics, including the Casa Americano which combines Cappelletti, vermouth, grapefruit soda, fresh basil, and a twist of aromatic grapefruit peel. The Rose-Peach Sangria is one of Tapia’s secret recipes, and includes fresh stone fruit in season, fresh herbs and sparkling water for effervescence. The sangria is also available by the pitcher. 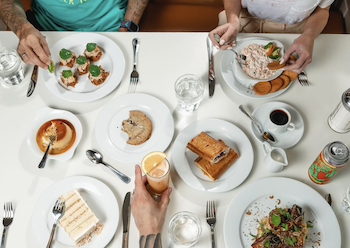 In the spring of 2019, acclaimed chef/restaurateur Michael Beltran expanded his restaurant empire with the small, unassuming pop-up Chug’s, located just blocks from his Coconut Grove restaurants, Ariete, Navé and The Taurus.

Named after the chef himself – an old high school nickname that stuck – the scrappy little spot was Beltran’s take on an American diner with a Cuban spin, a tribute to both classic American cookery and his rich Cuban heritage. Chef’s “little restaurant that could,” which has been closed for months, finally re-opened its doors on Wednesday, September 8 as a permanent and expanded full-service diner and modern day ventanita.

Many of the items above are available all-day. Those “in the know” know all about Beltran’s longtime collaborator, chef Giovanni Fesser, best known as Pastelito Papi. Prior to Chug’s original opening, his incomparable pastelito creations were found only at Ariete and the occasional pop-up. The launch of Chug’s meant the permanent home for Fesser and that continues to be true with Chug’s 2.0. Available to-go until sold out or for enjoyment on site seven days a week, a variety of Pastelito Papi’s precious pastelitos are on offer daily.

The sweet side of all-things-AHG is corporate pastry chef Devin Braddock. With AHG since 2018, Braddock oversees all aspects of the group’s dessert and bread programs. For Chug’s she is creating a special menu of treats designed as meal-enders as well as an array of sweets, treats, cakes and pies that will also available to go. She is also bringing back some of Chug’s signature desserts, including the decadent arroz con leche and classic flan. 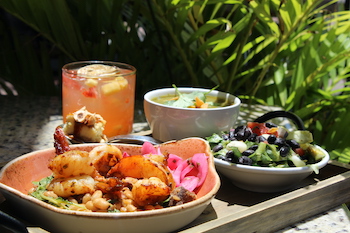 The best lunch deal just hit the Grove! Starting Tuesday, September 14th Jaguar Latin American Habitat will bring back their famous “Hot Lunch” menu! Guests will be able to order from a delicious, fresh, and fast lunch menu. Enjoy a hearty lunch for just $19! The Hot Lunch will include a soup of the day, salad, main dish, sweet spoon bite dessert, and fresh natural fruit water. The Hot Lunch menu will be available Monday through Friday from 11 am to 3 pm. 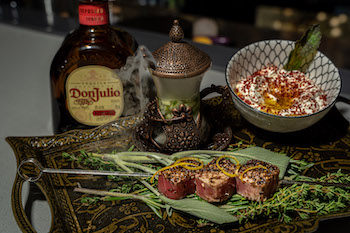 Yearning to travel abroad? This four-course tasting menu and cocktail pairing explores the flavors of Southern Europe, Turkey and Greece, North Africa, and the Middle East. Each dish is accompanied by a unique libation featuring a brand from the Diageo portfolio. Dishes such as the “Pot” The Vase Down – phyllo dough pot, black olives dust, goat cheese foam, heirloom tomatoes, caperberries, and flowers and herbs; served with the “Tomor’Rose Another Day” – Ketel One Botanical Grapefruit Rose, aloe vera liquor, ramazzotti rosato, lemon juice, and rose water. Available for Dinner Sunday-Thursday; $95 person++. 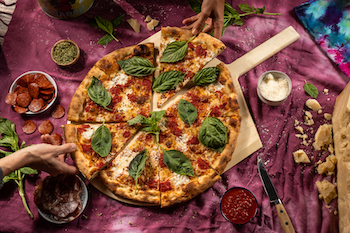 This collaboration will feature local favorite Ted’s Classic Burger as well as a special Collaboration Burger ($14) – double patty, roasted mushrooms, thyme, garlic, shallot, mozzarella, garlic confit, caramelized onions, parsley, and sourdough breadcrumbs. The special promotions will only be available via TOCK, purchase your tickets HERE. Due to the pop-up, Eleventh Street Pizza will only serve slices (no pies) and salads in addition to the burger and pizza slice combo ($20).

In love with these new poke boxes from @pokeog. Pi

Obsessed with this crispy chicken bucket from @ben

GIVEAWAY ALERT: We've teamed up with @coyotaco for

This Nutella Ferrero milkshake from @miamidinersob