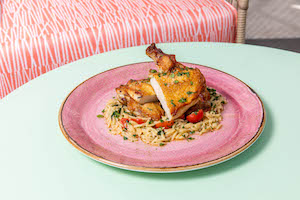 Strawberry Moon is a highly sociable—and spacious—food-and-beverage concept, dappled in Art Deco pinks, lagoon blues and palm greens. From its fresh, authentic Mediterranean cuisine to its vintage resort-inspired bar, Strawberry Moon flows seamlessly from indoor parlor to outdoor pool-scape, which will serve as a swimming-and-sunning club by day and a starlit lounge by night. In total, the space, designed by Ken Fulk Interiors and landscaped by Raymond Jungles, covers 30,000 square feet on the third floor of The Goodtime Hotel.

Entrees will include grilled branzino and Wagyu beef short ribs. Overall, Strawberry Moon’s menu aims to deliver easygoing but outstanding fare; the sort of feel-good food that diners will come to rely on, knowing that each and every experience will be as delicious as the last.

Aesthetically, Fulk’s vision for Strawberry Moon has manifested itself in a modern-day iteration of retro getaway chic, transporting throwback Caribbean charisma to contemporary South Beach. Inside, there are blond wood floors and turquoise grasscloth walls, while scalloped shell barstools and Art Deco chandeliers add a nostalgic gloss. The pool itself is split into two white-and-pink tiled broad-stripe basins, with a palm-lined runway between them.

With multiple seating areas, including sun loungers, daybeds, VIP cabanas, and more, the outdoor expanse of Strawberry Moon progresses from its aquatic stage to a loggia lounge, where patrons will find a DJ-booth, additional seating and another open-air bar. Here, an elevator provides direct access from Collins Court downstairs: Strawberry Moon will be open to all, from hotel guests to those just wanting to stop by for a quick visit. 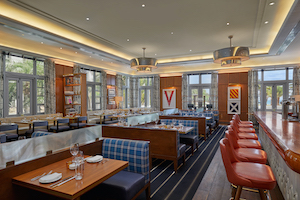 Lure Fishbar will once again dock at Loews Miami Beach Hotel after a year at sea, opening its doors on Wednesday, May 5, 2021. While much has changed over the past year, the passion, quality and talent behind the elegant seafood brasserie and cocktail bar remain the same.

A treasure trove of fresh catch dishes with a vibrant bar scene and elegant atmosphere, Lure has been a staple for seafoodies and a haven for Miami locals for seven years. Between consistent, catch-of-the-day freshness and a posh nautical motif, Lure has earned its stripes in Miami’s culinary scene as the place for honest seafood. In celebration of Lure Fishbar’s return, guests are invited to indulge in the specially curated Cheers to the Sea shellfish tower promotion, available through June 30, 2021. 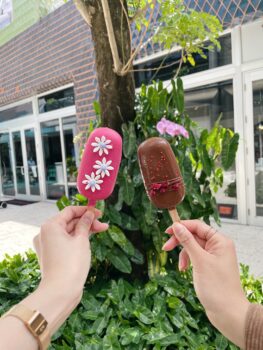 Frohzen, the whimsical ice cream shop by longtime protégé of the late Joël Robuchon, Executive Pastry Chef Salvatore Martone, has debuted new and exciting menu items that make for the ideal indulgence as the Miami weather heats up.

Known for his boundless creativity and use of innovative techniques, Martone has developed unique and Insta-worthy treats, all using his signature ice cream flavors as the base. Frohzen’s classic desserts including Ice Cream Cupcakes, Frohzen Macarons, Cake-sicles and Ice Cream Cakes remain on the menu.

His newest creation is the Ice Cream Donut ($7). Taking inspiration from the beloved dessert, but made completely out of ice cream, the donuts have two layers of different ice cream flavors, dipped in chocolate and topped with a signature glaze. The Ice Cream Donut comes in two different flavors with additional flavors to come:

An elevated version of a classic treat, Cookie Sandwiches ($7), have been added to the menu alongside the popular Frohzen Macarons. Homemade cookies are filled with ice cream and rolled in sprinkles and Fruity Pebbles. They come in flavors including:

Oreo – in a chocolate chip cookie, rolled in sprinkles

Guava Maria – in a sugar cookie, rolled in Fruity Pebbles

For those who prefer to drink their ice cream, Milkshakes ($10) are now available and are created with Martone’s unique “cake ice creams,” which are made by blending house made sheet cakes with an ice cream base. Milkshakes are topped off with colorful marshmallow lollipops, crumbles, sauces and, of course, sprinkles. Milkshake flavors include birthday cake, chocolate, red velvet and tres leches.

Hiyakawa Teams Up with Alex Chang 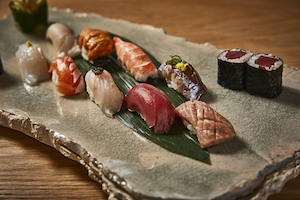 The upscale and contemporary Japanese restaurant Hiyakawa in Wynwood is hosting its first ever guest chef collaboration dinner. For one weekend only on May 15th and May 16th, owner Alvaro Perez Miranda and Hiyakawa’s Executive Chef Masayuki Komatsu welcome Chef Alex Chang from Quiquo to offer an exquisite meal where cultures blend and the finest ingredients shine.

Chef Alex was born in Hong Kong to a Mexican mother and a Chinese father and was raised in California, but that is not the only reason why his cuisine is borderless and multicultural. Chef developed his skills in various professional kitchens all over the world, from staging at the two-Michelin starred Les Créations de Narisawa in Tokyo, cooking at Animal in Los Angeles, Pujol and Quintolini in Mexico City, In De Wulf in Belgium, and to opening Vagabond in Miami with restaurateur Alvaro Miranda Perez, the owner of Hiyakawa, and earning the StarChefs Rising Star Chef award in 2016.

His acclaim gained him the opportunity to collaborate with celebrity chefs Andrew Zimmern and Tom Colicchio, and in 2017, Chang was appointed to be Executive Chef at the Freehand Hotel in downtown Los Angeles where he was responsible for overseeing food at TheExchange Restaurant, Rudolph’s Bar and Tea, and the Broken Shaker. The Exchange received a rave review from the famous LA Times food critic, Jonathan Gold, and was featured on his yearly list of best restaurants’ in Los Angeles. He is now preparing for his future project, Quiquo.

Hiyakawa’s Executive Chef Masayuki “Masa” Komatsu, originally from Osaka, has also been travelling across the seas for the passion of cooking too, from working at Sushiden in New York, Kenzan in Tokyo, Morimoto on South Beach, and Blue Ribbon in Miami before joining Hiyakawa in 2020. Chef Masa crafts traditional Japanese cuisine with tireless dedication to details, orchestrating series of seasonal ingredients, which of many are flown in directly from Tokyo.

For two nights only, these two international chefs will be working side by side, offering an 8-Course Tasting Menu full of unique dishes with Japanese essences, such as Gougère with Japanese Curry and Comté Cheese, Hokkaido Uni with Buckwheat Waffle and Koji Cream with Finger Lime, and Soba Panna Cotta with Strawberry Granita. There will be a “sushi-break” in the middle of the tasting menu too.

The tasting menu is $175 per person with an option of a beverage pairing available for $79 per person, on Saturday, May 15th and Sunday, May 16th only, between 6 pm and 11 pm. Reservations can be made up to a party of four via Tock.